Pics of Australian Forum Members'choppers in the 60's & 70's... post or email your photos and commentary to andrew@choppersaustralia.com
Post Reply
2 posts • Page 1 of 1

This was my second chopper. It took me 2 years to build and was finished with a few weeks to spare before riding it to Pt Pirie to start at my first teaching post in Feb 1974. The bike was a 1948 model U ex SA police bike that my father had purchased years before and always run with a sidecar. It had been languishing in his shed for a few years with a stuck rear valve. 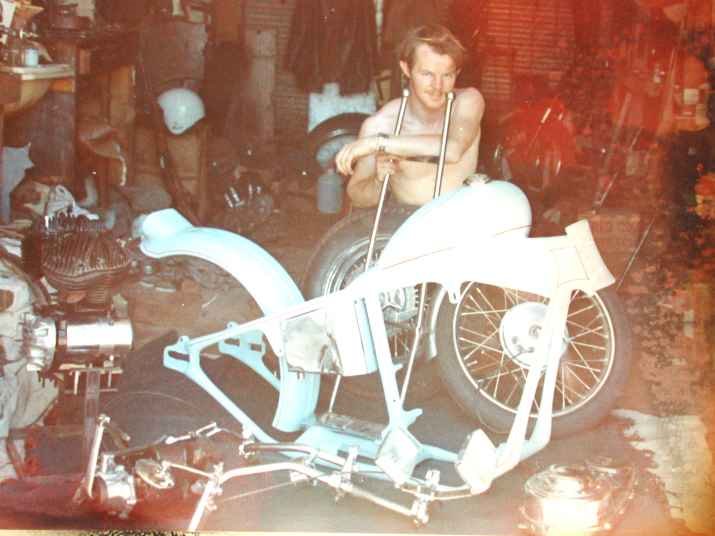 Pulling off the heads revealed a fair bit of wear in the bores, so I took it to Southcotts for a rebore and new pistons and rings. The bloke I spoke with in Southcotts was an older fellow who had rebored them for the Police back in the day. The barrels were bored out slightly to take Ford pistons and rings. 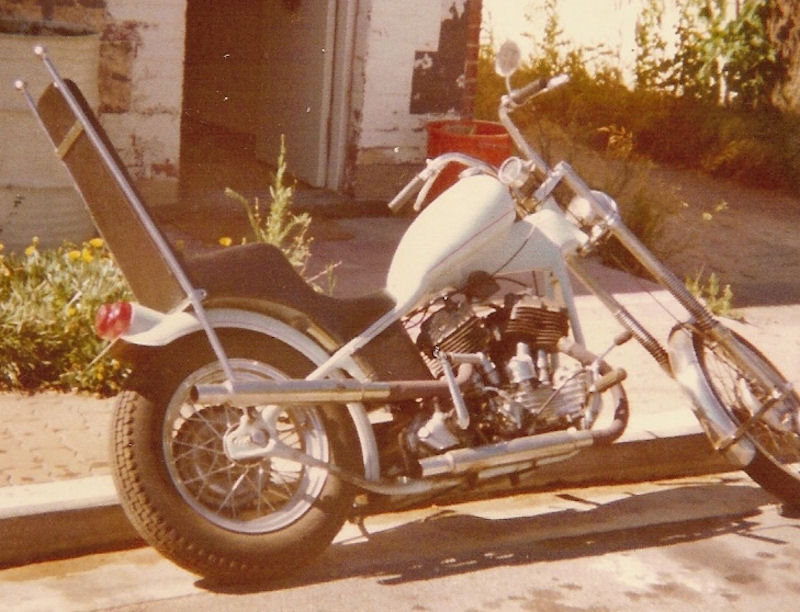 I was one of the lucky chopper enthusiasts having access to by father's gas welder, arc welder, bench drill, power hacksaw and a wide range of hand tools. As a result weekends usually consisted of me building handle bars, exhausts, sissy bars, seats and highway pegs for all and sundry as well as working on my own projects. I rode a 350 Aermacchi that I'd chopped while the U was being built. 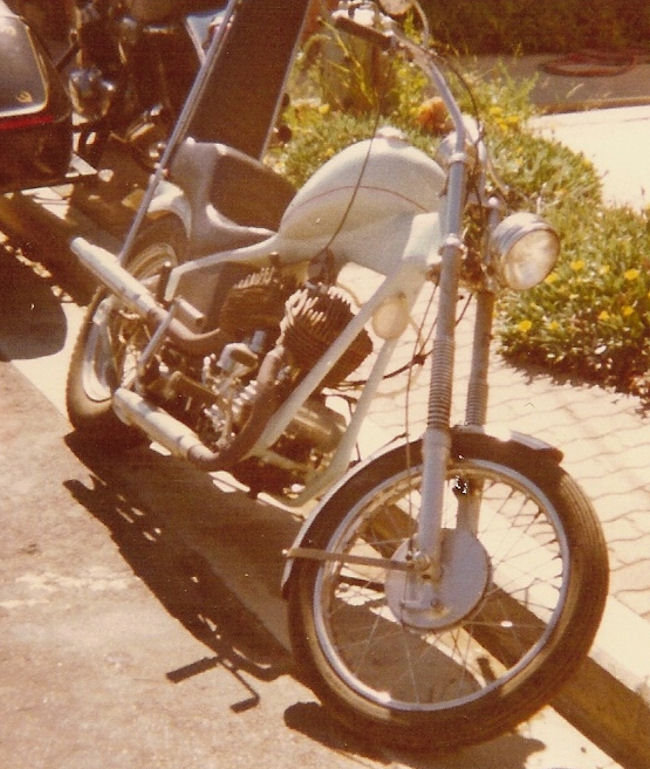 All non essential brackets were removed from the frame, a new side stand fabbed and welded on, sissy bar brackets, exhaust brackets etc added. The Aermacchi donated its tank (same as superglide of the era) and this was set up to look like it was moulded into the frame, but was removable. Entire frame was moulded. Front end came off a Norton with 8" over fork tubes added. Norton wheel was used with a 3.25x19 tyre. Dad had put a 4.00x18 on the back so Adelaide Wheel and Rim spoked up a 16 incher for me. It ran an Avon 5x16 which cost an horrendous $25, double the price of a 4.00x18!

Sissy bar was originally meant to be topped by a couple of flash hiders off SLR's which we'd found in a metal dump down at Pt Adelaide one night. I decided to not use them as about this time I got badly defected by some nasty cops. The sergeant in charge said he was going to put all choppers off the roads; Police Commissioner backed him up! Sissy bar ended up topped with a couple of large ball bearings instead.

I had the exhausts bent up for me by a place that did motor cycle pipes using packed sand and bending with heat. I replaced the original carb with an Amal which worked well. 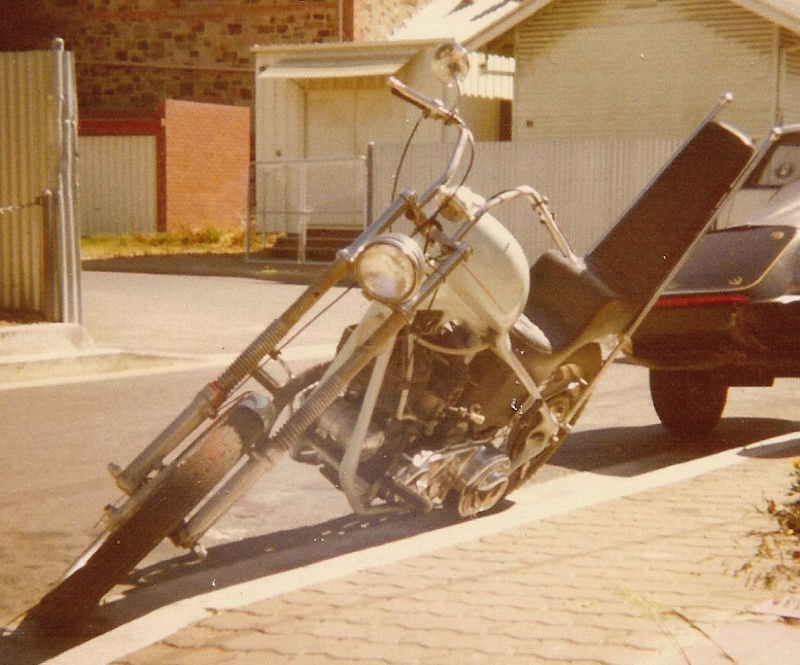 Forward controls were fabricated, but gear shifting proved to be an issue. Original U was hand shift/foot clutch. Chopper mags of the time showed how to convert the foot clutch set up to hand clutch so that was easy. To set up the foot change with positive stop required a ratchet top for the gearbox which had to come from Harley Davidson in America with lots of letter writing in the process and then shipping by ship! To get it on the road I just ran a link to a normal style foot change. Problem was, you could not easily gauge the position of each gear. Gear changing could be terrifying if in a hurry, like accelerating through an intersection and going form first to top, missing the rest and almost stalling! I almost got cleaned up twice; I mean I was missed by a bee's whisker.

The ratchet top finally arrived after months of waiting... and turned out to be the same as the original hand change. More letter writing and waiting, by which time I'd had to buy (and then chopped) a CB500 to ride. 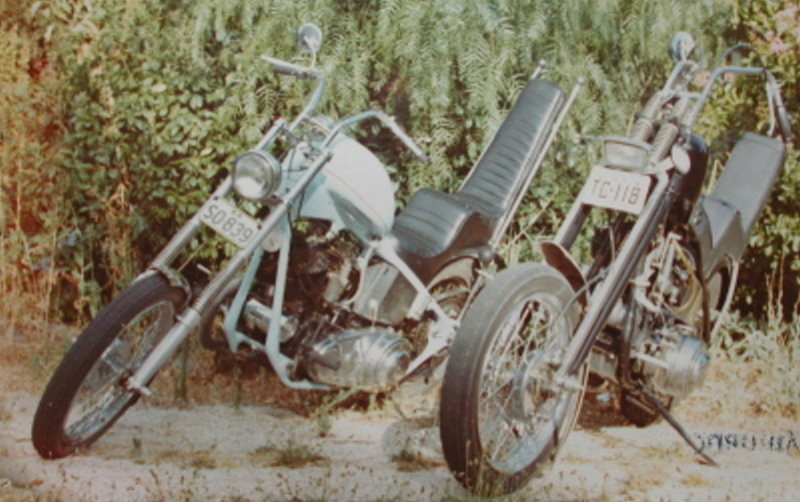 Chrome plating was another issue... done by Lange in the city. He over polished the oil tank, so the day we first fired it up oil poured out of the tank. The silly blighter had SOLDERED up the seams he'd polished out! So I had to reweld the tank and to get it ready for Pirie and it stayed black!

The chopper was a delight to ride (aside from gear changing), had heaps of torque and was quite comfy despite being rigid. The sissy bar/seat backrest had a lot of whip, not appreciated by my girlfriend who would just about blow away in a strong wind!

I initially ran a pair of Lucas rectangular driving lights the lower one with a fog light lens. Although I'd installed 6Volt QI globes (all bikes through to the late sixties were 6V) the generator could not handle the drain and at night the bike would finally die through lack of battery power, so they were replaced by a single 5" light off my Aermacchi.

My first long ride was a few weeks after it first got on the road and was up to Pt Pirie for my first 2 days das a teacher (Thurs & Friday orientation). Slowing rolled into Pt Wakefield with a badly slipping clutch, which I adjusted up at the Shell servo. Great riding up to Pirie, but the Amal started flooding on the out skirts. As I pulled up a fellow mowing his lawn enquired about my troubles (I was already an hour late) and offered to take to the school and leave my chopper at his place. His son rode a 350 twin Honda he'd just bought.

My senior master was NOT impressed by this young, greasy, chopper riding freak who was so late! Anyway, my 21st Birthday ride was on the Sunday, so straight after school I was back on the road heading home. Only eventful thing was coming through The Hummocks, my face got splattered with something. When I pulled into the Pt Wakefield servo for fuel, I found a dead bird in my lap. It had hit my clutch lever and been gutted, my face and jacket collecting the meat and blood and feathers!

My twenty first birthday ride to Goolwa and Victor and back for lunch went without a hitch and 4.30am Monday morning had me heading back up to Pirie to start teaching in earnest. The chopper was always parked in the street opposite my class room, and though I was not a big hit with my senior master, I definitely was with the kids and within a few days was riding with a half a dozen of the local lads just out of school and with their new licences and new bikes... but the adventures we had is another story.
Chopit'nrideit... Prof
Top