Pics of Australian Forum Members'choppers in the 60's & 70's... post or email your photos and commentary to andrew@choppersaustralia.com
Post Reply
8 posts • Page 1 of 1

VMAX's 69 Triumph...
I few weeks back In dropped by my parents house in Ireland on my way back from working in Germany.
I grabbed a few (poor quality) photos of some of my previous chops (still many good ones to find).

Anyway here is a Pic of my first chop. 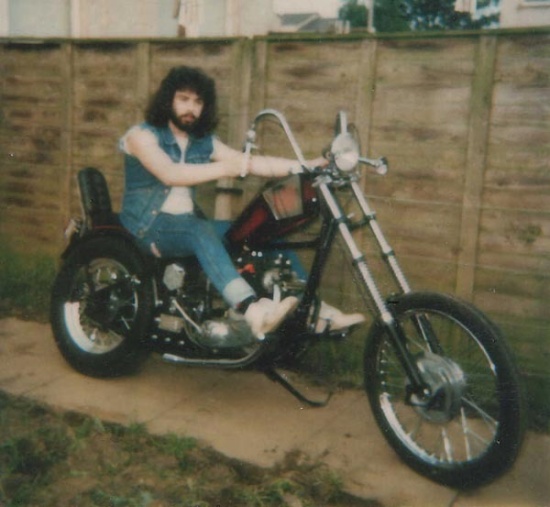 A 1969 Triumph T100SS with bolt on hardtail. It had a Kawa rear wheel and I did some simple but effective mod to get the brake drive to cross from your left foot to the right handside rear hub.

It has that coffin(diamond) tank that I was talking about.
Plugged on many posts.. in the hope of finding one for sale. 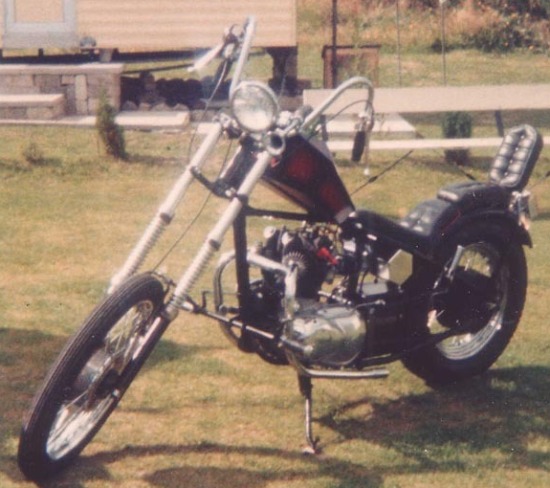 Also it has the same handle bars that you will see on my CB750..they kept coming back to me
Also plugged on several posts with the same hope 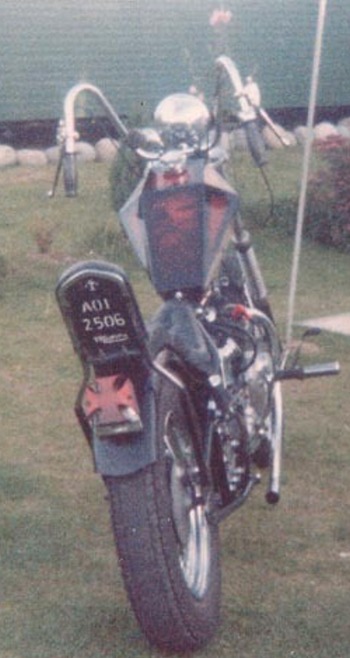 It was approx 1985 when I built this bike, while unemployed..a slow process, as you can imagine.
The bike was built in the house (started upstairs and ended in the kitchen)
The very first day it fired up I nearly burned it and the house down due to a slight petrol problem...and amal carb 'tickling' excessivness!
A long story which I may write some day.

VMAX has sent another couple of pics with a full history which will appear in April/June Chopers Australia News being put together at the moment. We'll add it and a brief account to this thread in a few weeks...
Chopit'nrideit... Prof
Top

Sweet bike. But I gotta ask about the horn on the handle bars ??
Top

Yup, im still that lazy!
No wiring involved...
and with straight through pipes no one was gonna step out in front anyway

I guess it was a local fashion then.. loads of people had the 'olde' style honker! Bit crap nowadays I agree.
BUILDING BUDGET CHOPPERS AND RUSTY RATS SINCE 1983
..One Day I'll get it right!..
Top

I thought it was an old honker style. It's pretty cool actually. That bike is all 70s class.
Top

70's style yup! But I put this together around 1985.
The Chop thing really took of in Ireland in the 80's up until about 1991.
(Back Street Heros helped)
Now in Ireland (I was back there a few weeks ago) there is little enthusism for Chops.

I recall taking one of my CB750 chops to the 'North West 200' racing /camping and beer drinking weekend - the big event for bikers over there and I was the only person that I could see from thousands attending that rode up on a chop. (That was about 1999).

But im sure it will revive thanks to some of the clubs (like NCC) that still keep the faith.

The fact that chops are 'out of fashion' in Ireland means that people that have one rusting in the shed are easly tempted by a few bucks.
Just look at ebay.co.uk I reckon it is similar in England. A good time to buy

BTW I actually found 3 old copies of BSH dated 1989 at my parents place. I have them at home now so any of the Brissy guys are welcome to have a look.

seeya!
G.
BUILDING BUDGET CHOPPERS AND RUSTY RATS SINCE 1983
..One Day I'll get it right!..
Top

yeah that bikes cool mate, love the horn to, was thinking about one of those for mine.... you look like a real headbanger there too... ultra cool.
Cheers Rob
750/4 choppers Rock
Top

Headbanger, yup! for sure..
Those with really good eyesight and attention to detail will notice my handpainted 'purgatory symbol' on the sissybar/number plate.

Early Iron Maiden (and current?) album covers sport that logo somewhere...yes rush and get your copy of 'Number of the Beast' or 'Piece of Mind' and see for yourself!

I really liked investigating the Album covers while being brainwashed by all that 80s subliminal back tracking...
heh hehe... wow, I really am getting old!

Actually looking at the image again, you would need exceptional eyes and imagination to see what im talking about. The top of the numberplate has the symbol (vaugely..) the below it is the number and at the bottom is my hand 'crafted' Triumph logo... yes my painting sucks!!!! Hard to reccognise eh!? Was clearer to me in the 80s!