Discuss and show your current or planned project here.

Here's the first pic from G'day folks....
I have a C and G Manufacturing sprung heel frame with a 69 model Honda 750 engine. Fitted with 16inch rear and 21 inch front wheel on 12 inch over forks. I have managed to pick up some trick bits along way. Started it for the first time last week. ( Motor had been in a shed). 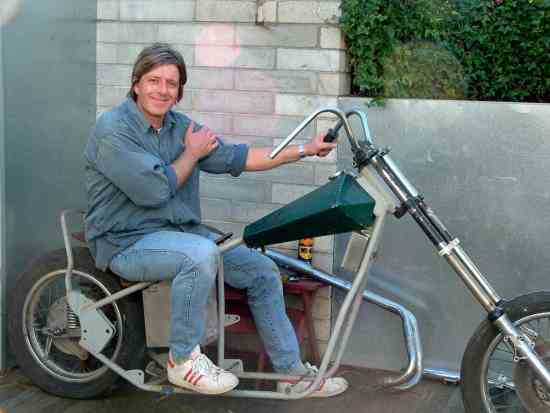 Some years a go I brought a trailer load of ex police 1979 CB650s. I made up one and kept the others for parts.
This project started because I was stripping it down to tidy it up a bit. 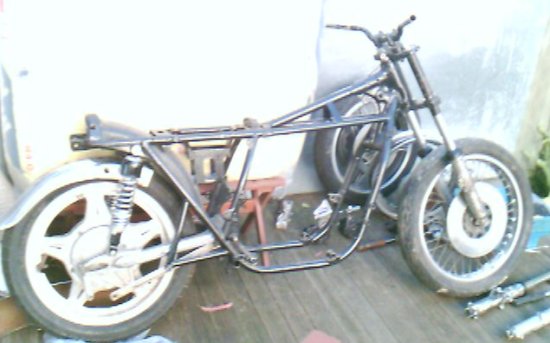 After powdercoting the frame and repainting the tinware I decided I wanted to do a bit of customising. (I have always been into choppers but the American chopper show was being aired on tv

I purchased a set of 12 inch over forks complete with stiffening bar from a guy in Wisconsin USA ( $200 AU delivered ).

When I tried them on my bike I realised I would need to do some frame modifying to get them to work.

I came across a fellow who had an early cb 750 frame ( stock ), chrome swingarm, forks wheels and guards. I brought these with the aim of altering the frame. ( Brother in law is a steel fabricator )

I then put an add in the local trading post to see if I could pick up any other chopper parts.

I got one call from a fellow about 3 hours drive away.

As it happened I was taking a trip up that way so took the detour and dropped in to see him.

He had 2 choppers in his shed.

One complete and running hardtail with standard forks, and one that was just a frame and parts. He also had an old 750 motor.

I purchased the frame and parts ( tank, forks, wheels exhaust, electrical boxes and guards ) because I liked the coffin tank and it had a 40deg neck rake.

I thought I was still going to use one of my 650 motors in it.

When I got it home and set it up ( as per early photo ) I realised it looked pretty good and I should do it right.

So I rang him back and got the motor freighted to me. He said it was a K2 but when I checked the engine number it turns out to be one of the early 69 KO motors.( bonus )

I wasn’t sure if the motor was any good as it looked rough. The side covers were grazed and the black paint all flakey.

I picked up a chrome tappet cover and side covers ( ebay ) and found some old chromed grille trims in the local wrecking yard.

I re gasketed it and fitted new s/steel bolts to covers.

After spraying some CRC down the cylinders it turned over fine.

I sprayed the frame guards and tank ( flames copied off a 70s chopper - thanks Merv for the photo) and started to hunt around for the other bits necessary bits and pieces. 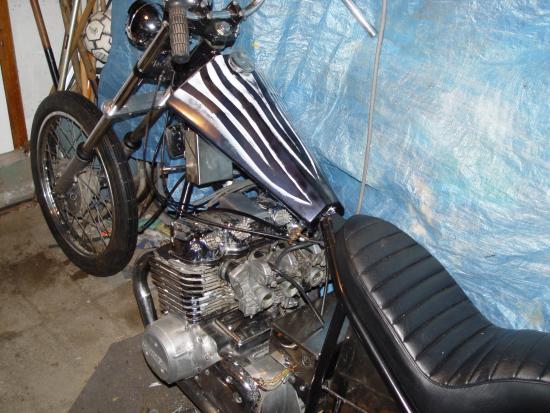 The guy who recovered the seat did a great job and got the old school look just right.

The frame came with a standard 18inch Honda front wheel and disk.

I removed this and fitted a 21inch trail bike rim. Alum welded a brake stop to the fork leg. 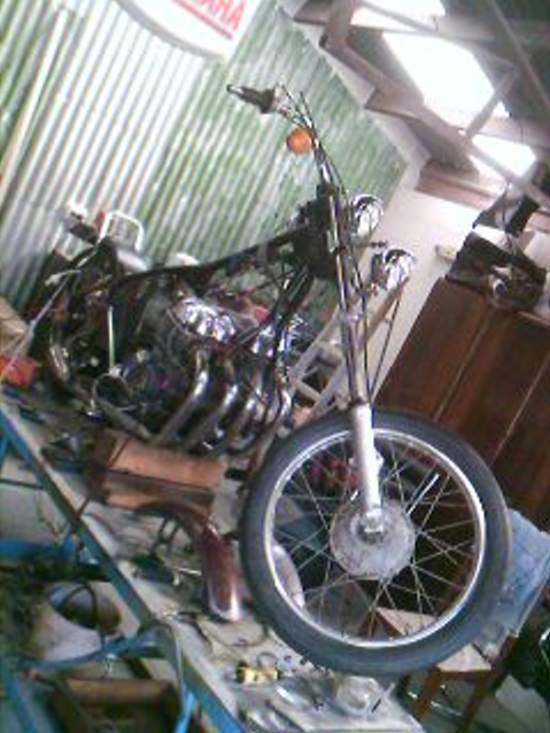 The difference was amazing. Slim and big. The front now has that wide glide look. I had to remove the pullback bars I had fitted and fit westerns because the front is now a bit heavy.

Im still happy though. It will go well in a straight line.

Rear is 16inch with flat fender.

Dave from Dubbo is real chopper enthusiast is currently doing the wiring. He pulled off all the obsolete stuff and is concealing everything. 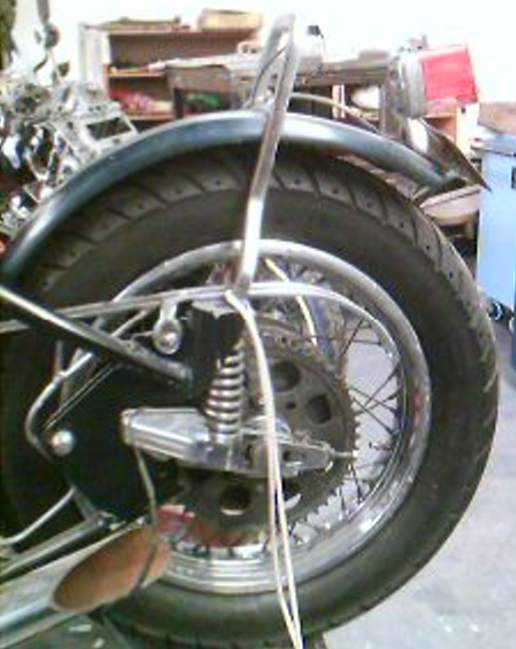 He also moved things around to remove the clutter off the front of the frame as the down tubes have a tapered section. 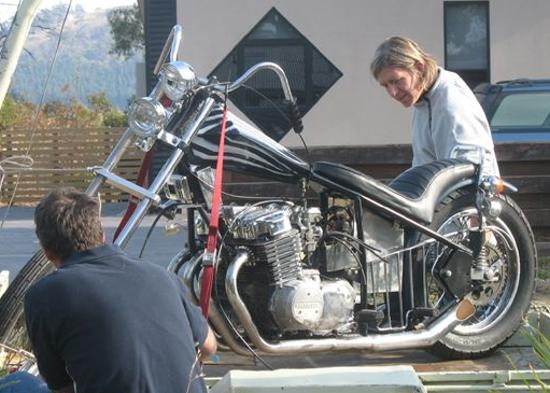 Should be on the road soon. Im planning special interest rego. 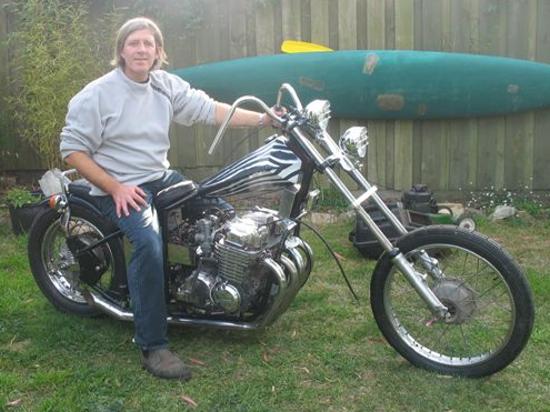 Wow, turned out really cool, do you know what trail bike the front wheel is from??? and did it take many mods to fit it to the honda forks???... Love those pipes too. AWESOME.
Cheers Rob
750/4 choppers Rock
Top

dont have another spare 12 over front end do ya??

Mate that has turned out to be one real wicked looking ride, Keep up the great work.

That`s a nice chopper you got there...!!I love the frame work...
Top

Thanks to all for your enthusiastic comments. The project had taken more time and effort than i expected and i was feeling a bit worn down by it. Im now really keen to get the first ride in. In Tasmania you can register special interest vehicles like hot rods and charity cars. Rego is about half the normal rate. The limitation is you can only use it 52 days a year and you have to keep a log book. This helps though if your running 2 cars and your other bike ( the ex police cb 650 if i get around to finishing it). Yes i do have another set of 12 inch forks. I still have the stock frame that im playing with though. I was considering doing another one with all the parts ive found. Ill keep you posted.
Thanks again
Andrew
KO 69 Chopper

Rob 74 Chopper. in answer to your question re the front wheel, no i dont know what its off. I just went down to the local wrecker and grabbed one that had a smallish drum brake fitted. I marked the stop location on the front fork and then got a alum block welded on. It was trimmed it a little when we got it set up and centred with spacers. The early honda xl series trail bikes had small black painted drums that would look the goods.
Andrew
KO 69 Chopper
Top 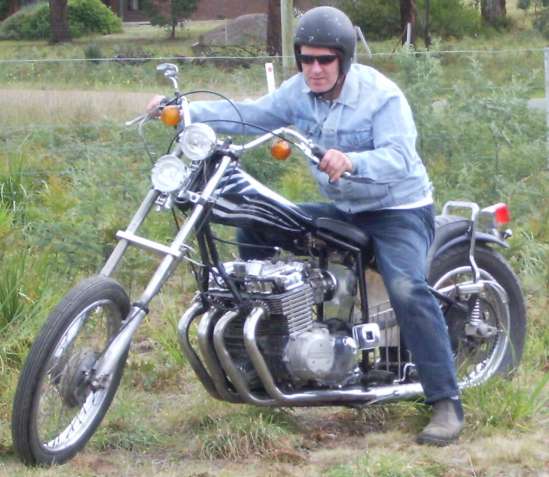 Bike handles well on the road, but a bit exciting in the paddick!
Chopit'nrideit... Prof
Top

Return to “Your Chopper Project... with photos...”