Found this on razzledazzles website...
This is what i call true classic chopper artwork... beautiful... 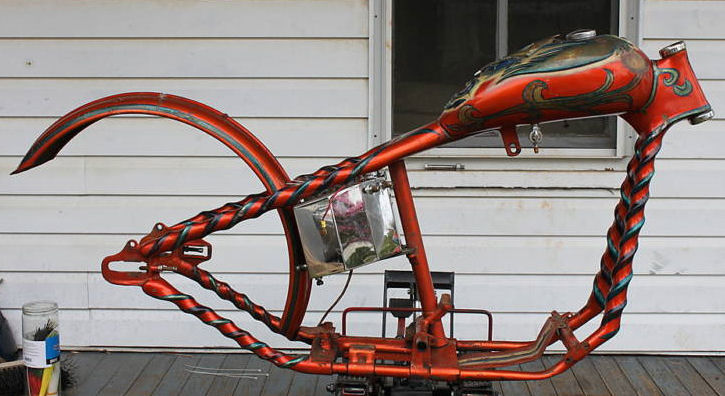 Hey Andrew where do you manage to dig up such gems, i am currently looking for a frame or complete/incomplete bike to bob, really want to get a nice old Triumph or BMW/Ural preferably 60-70 era.

Is there a place somewhere in NSW which deals with such antiquities?
And where do you mostly source your projects, if its not a trade secret?

I found the moulding job by troling chopper websites and going through all the links... have hundreds of photos from them to add to our site... just short of manhours.

Re diggin up project bikes, no trade secrets on these forums I hope...

I haven't picked up too many of my own projects simply due to time and money. There is a mass of Triumph stuff from bits, motors, frames to complete bikes at Murrays Brit Bikes in SA (see 'Services' webpage).

Much of it seems to be a matter of having a wide range of contacts who know what you want. Must be shops similar to Murrays in Eastern states. Trumpies are bringing a premium these days not far behind Z1's, Shovels and Pans. CB750's, then XS 650's at privates sales are cheaper and CB's rarely need bottom end work. Those newly imported W650's (850's coming soon I think) I reckon are a good deal if you have the money.

I had considered chopping it, but figured I get better money stock.

Be aware that ADR's came in in 1975 so regs on them are more lenient.

What does everyone else think?
Chopit'nrideit... Prof
Top

Any ideas on how the spirals were done and what was used to build up the images?
Top

I I was moulding the spirals I would wrap some steel cable up the legs to form a foundation and create the right lines; then build up the bog on top of that.

I haven't done anyting anywhere near this fancy. but I build up up the areas I want in layers aobut 6-8mm at a time and then rough it back with a short knife and hand chisel before it is fully hard.

Once hard I use very coarse 'sand' paper on the end of suitable objects to get into the smaller spaces. Die grinder wuld also work but you need to rest it against your second hand to keep it under control.

If there's one attribute you need with moulding it is patience.
Chopit'nrideit... Prof
Top

I have seen auger bits used to create the spirals effect, i also have the rooted camshaft out of my phoenixs 318 that i want to use as a down tube in some future project.
friends welcome family by appiontment only.
Top

If it's for decoration only, that's fine but I wouldn't use a camshaft out of a car as a load bearing frame member. Most are made of cast iron and cast iron will snap like a carrot that's just out of the fridge if it's flexed in any way and frames will always flex a little bit. If Chryslers used steel cams shafts, then go your hardest.
Top
Post Reply
8 posts • Page 1 of 1