Chat about choppers here. Any posts considered by forum administrators to be used by businesses as unpaid advertising will be promptly removed...

Our scheduled Suth Australian May ride was to visit the national military Vehicles Museum at Edinburgh. Some ringing around during the week got a possible eleven riders. We had had a fair bit of opening rain, but the forecast for Sunday is for an overcast and cool, rainless day.

Sunday morning rolls up... Rilda is unable to come on the back, so I have offered my pillion seat to our Junior member Robert... who did not need asking twice. His dad brings him down with enough time to grab a helmet, gloves and one of my spare leather jackets, kept just for this sort of occasion. A slight delay while Rilda chases up my wallet which I’d forgotten and with the Shovel now very much warmed up we take off out of the gravel drive with a roar, spitting small stones in all directions. He He He!

Kevin and his lad on Kevin’s shovel and Steve on his KZ 1100 are waiting at Reynella. We behave ourselves cruising with the traffic, accelerating through the occasional opening as we negotiate our way through Adelaide suburbs and city, slowed down a few times by 40 k roadwork signs... most annoying when no one is actually working; but the signs stay up anyway. At one traffic light some one behind keeps honking their horn. Looking back, I see some hands waving out of a black 4WD... someone who likes choppers I guess, so as the lights turn green I ‘linger’ to allow them to catch up. Surprise, Surprise. It is my son Paul and his mate going on a trip to Monarto zoo for the mate’s birthday. Paul had gone to his mate's an hour earlier.

Once onto the Salisbury Highway, we are able to briefly give our long suffering bikes their heads as we accelerate up to 100k before turning off on the Pt Wakefield road to our next rendezvous. We are first to arrive and wait on the road side for the rest to turn up. First are Craig and his lad on his customised (very customised) shovel and his wife Suzy on her 650 yammy cruiser. Wile we wait for the rest to turn up everyone admires Craig's turned and milled brass work and beautifully twisted handlebars and sissy bar.

Peter rolls up on his Suzuki factory chopper, very loud since he and I attacked his baffles and then shortly after we see the familiar sight of Brian hunched over his newly acquired standard XS2. His xs1 chopper needs a rear wheel rebuild.

Earlier in the morning I had worked out our route to the Museum on google maps and as we are about to head off check it up on my street directory... very different story. What now? Brian reckons he knows how to get there, so he takes off with the rest of us in tow. As we have some nice 3 laned road, I take the opportunity to pull up alongside Craig and get a couple of riding shots. Get one and his shovel cut s out, fires again then cuts out a few more time, finally dying. With some trepidation, we weave through breaks in the heavy traffic to get off the road. The others have disappeared ahead. A few pushes on the starter and the shovel fires up again, so we take off in hot pursuit of our buddies, but the miserable so and so’s are gone. 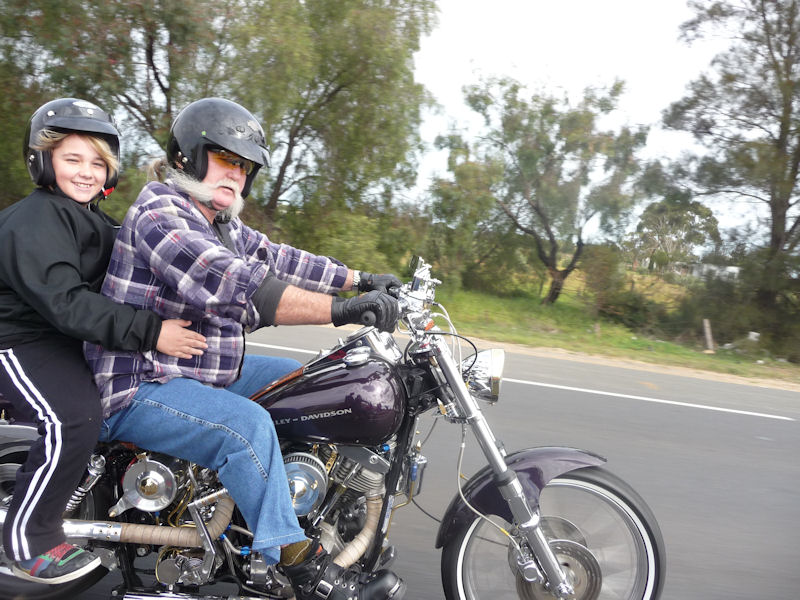 Brian had explained roughly where to go, but after a few turns by Craig who reckoned he knew the way, I ain’t too sure! Then his bike decides to die again. pick up and cut out a few more times before finally saying enough is enough.

When you are trouble shooting on the road, you can usually tell the difference between a fuel problem and an electrical one... this seems like fuel. As Craig had already loosened the fuel cap in case of a blocked vent to no avail and as the tank is full, the next step is to disconnect the fuel line at the carby and see if either the tap or the in line filter are the problem... sure enough, no fuel coming out of the hose. Pull the filter apart and turn on the tap...fuel now flowing. I am not a fan of inline filters as I have experienced this same problem a number of times in the past, both on cars and on bikes. 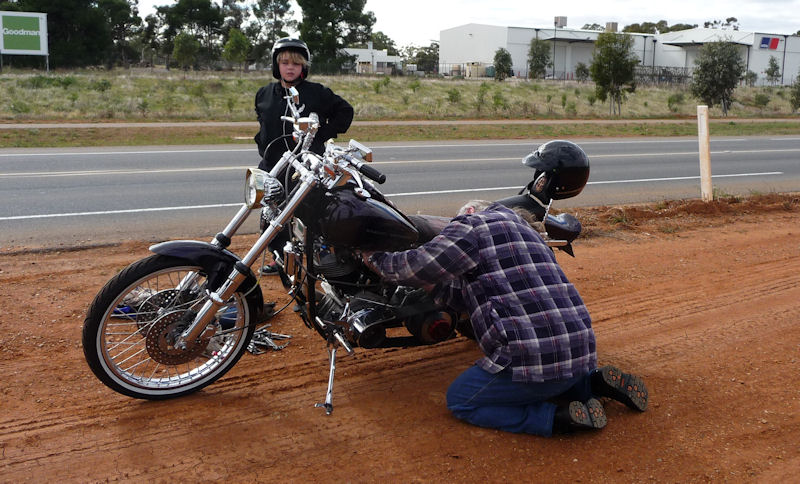 Two phone calls come in: one from a member in Mildura and another from Kevin at the Museum, wondering where we are. The fuel line sans filter no hooked up, Graig’s shovel starts immediately and Suzy who has been ribbing him about "Harley crap", gets a bit of what she deserves when I shut off her bike as she starts it, via the handle bar kill switch! Ha Ha.

We take off and then discover we have just one right turn and we are at the museum. We roll in past Hans who has come down from Roseworthy and is lying on the grass videoing us as we rumble through.

A new CA applicant, Darren, along with his daughter is with the others. They have come in his Ute. His recently purchased rigid yammie chopper is stripped and getting some TLC. The club is going to visit him and check it out next month. 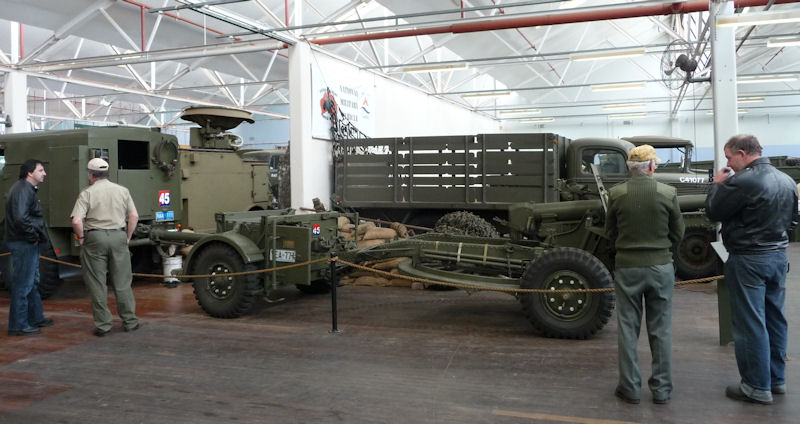 A quick count. There are 13 of us. Rats. We can get a reduced entrance fee if we are twenty. I count aloud every body by twos coming to 26 and the ladies get a giggle up and give us the reduced rate... lovely ladies they are too.

The museum has much more on display then their website would indicate and everyone seems to thoroughly enjoy themselves... a number of artillery pieces, trucks, armoured cars and a light tank being rebuilt, plus a variety of other displays of shells, firearms, uniforms and some dioramas.

When one of the guides tells me they do live firings of their twenty five pounder around the state I discuss with him the possibility of bringing it to the Willunga almond Blossom Festival which CA choppers are always involved in. He’s delighted with the idea and I promise to try to arrange it.

After a group photo inside, we get a couple more with the bikes... only one chopper and one factory chopper... Hmm not too good for a chopper club.

Where to now folks? A lunch location is ordered... Brian knows where we can pick up some food, so once again we take off after the purple yammie. Well Brian leads us to the place alright, and we enter some what unconventionally... up footpaths and over kerbs our bikes coming in from all directions milling around like a bunch of confused sheep... Funny to watch! 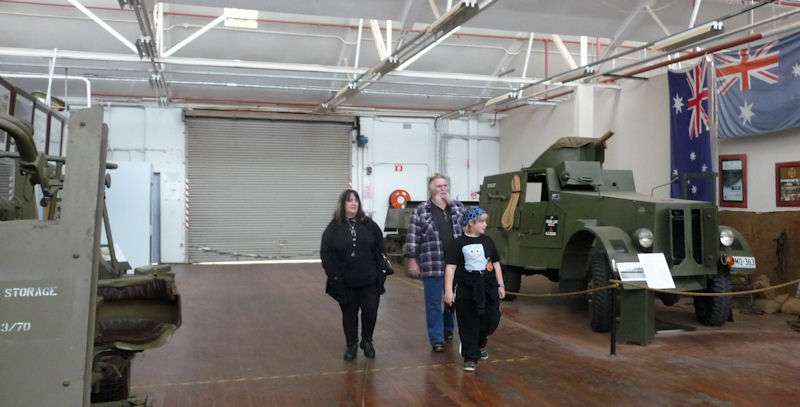 Watched by a number of locals we open our packed lunches, cans of food or freshly purchased fare and stand around talking and examining various bikes.

I go across to a lad who is lingering at a safe distance and find out that he really likes bikes, has ridden pillion a couple of times and really likes the red bike with the big sissy bar “but it needs a decent paint job” However he is impressed when I tell him of its various wanderings. I am just about to offer to take him for a quick spin up the road, when I notice a number of the guys are putting on helmets and mounting their bikes... looks like we are moving. 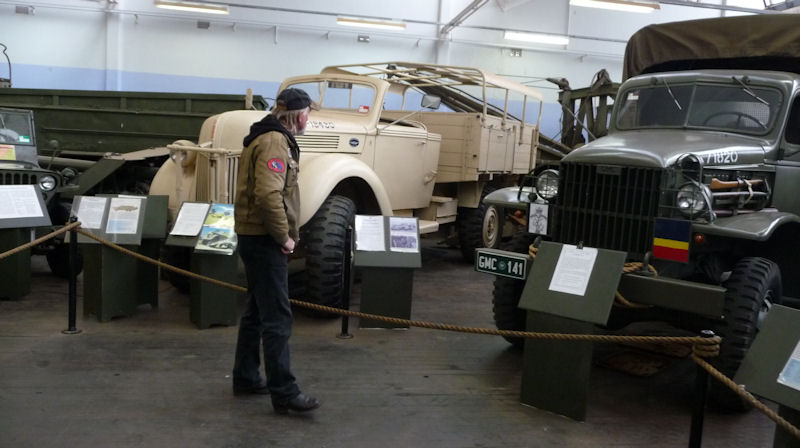 I reluctantly walk back to the shovel, but for the next half hour regret not having made the lad’s day with the offer of a ride.

We decide to head out to the eastern hills and follow Brian’s lead. When we turn left on Bridge Road, Craig and Suzie’s bikes go right. She has to get to work. During the next half hour we travel some great back roads and pass through One Tree Hill and Kersbrook, to the old site of Chain of Ponds. 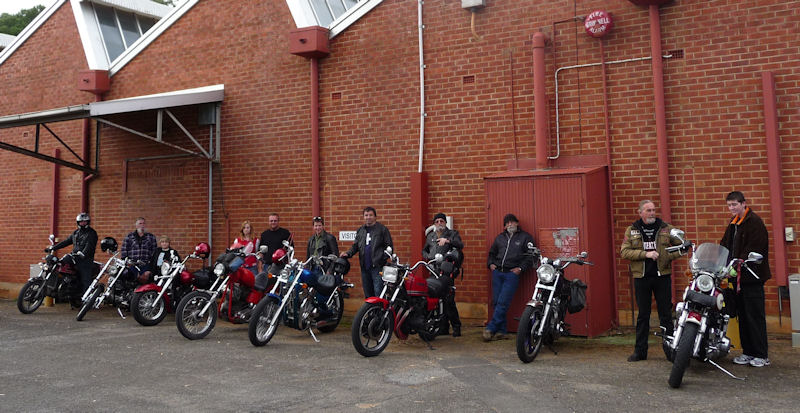 The latter town was demolished in the sixties to make way for the Kangaroo Ck Reservoir. I can remember the servo and deli as a child. Brian can only remember the pub! After a brief stop at the commemoration parking bay (commemorating Government arrogance I reckon – it turns out they didn’t need to forcibly remove everyone after all), with Brian once again in the lead, and at Kevin’s request we wind our way done into St Agnes. Hans departed at Kersbrook, so we are now Peter, Brian, Kevin and Mick, Steve and myself and Robert.

Peter peels off at Holden Hill and Brian comes with us as far as Greenacres to check out where to get his yammie chopper wheel respoked. We pull up at the shop to find the window of the next door servo has been smashed and stuff is strewn everywhere. Someone is already on the phone to the police, so Brian decides we should split before the cops arrive. He heads back home and Steve Kevin and I do some tricky U turns in traffic to head south again. 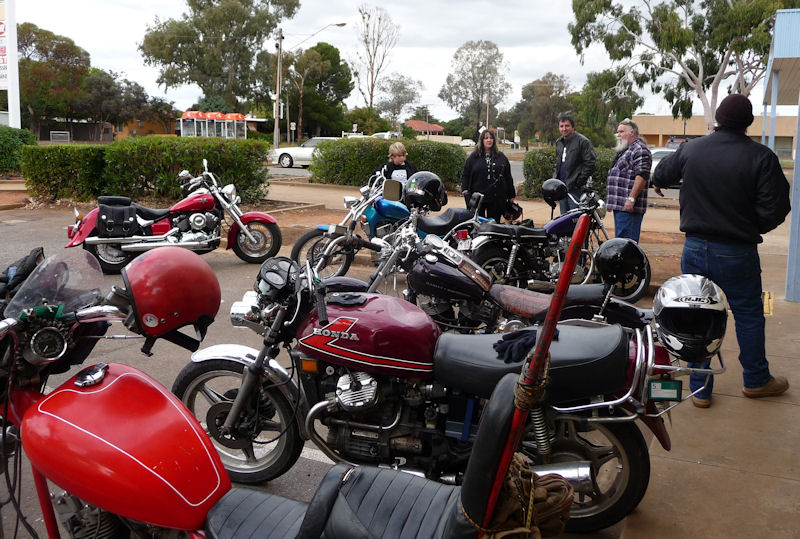 Not much more to report except that for a number of miles we travel alongside a very new Lamborgini. Poor Robert on the back can not stop bemoaning how unsuited such a beautifully fast car is in city traffic. Calm down Robert. He’d get booked out on the highway... to speed or not to speed ‘twould be just too tempting!

We cruise home through fairly heavy traffic enjoying demonstrating our superior manoeuvrability and acceleration at every opportunity. Robert and I absolutely blast up Tapley’s Hill and once on the top idle along until the other two catch up. Finally Kevin peels of and then Steve. In Morphett Vale, Robert and I pull into a servo for a quick sugar fix. The female attendant is very friendly, commenting how lucky we are to be out on the bike.

Out in the country again I take Robert on a couple of back roads to home. We come up the drive with a triumphant roar. What a great day it has been. Robert is chuffed to say the least.

Tomorrow I have to take a short run down to Aldinga. Guess my shovel and I will just have to wait patiently ‘til then.
Chopit'nrideit... Prof
Top

Yeah, I had a great time, we turned a few heads when we rumbled along all bunched up, what a blast. ………………. I would love to see more members joining in on the rides.

Great Story and Wonderful Pictures!
Thanks Prof!
Ride it like you can fix it.
Top

The brave may not live long, but, the cautious do not live at all.
Top
Post Reply
4 posts • Page 1 of 1

Return to “Chopper Chat (includes how to post photos)”