'To the point' advice on what fits what, parts interchangeability and simple solutions to common problems...
This forum applies to Hondas.
Keep your post brief. You may include 2-3 clear cropped photos (max 600 pixels wide)...
Post Reply
18 posts

Does anyone remember the Santee Savior frames made for the Honda 4s, and if so can you tell me anything good or bad about them?

Got an interesting possible offer today, not sure whether it was serious or not as yet, but one of the old guys at the boat shed was talking about an old bike with Santee softtail ( I'm presuming that's the Savior?) frame with a Hond K2(?) "pursuit" motor from the 70's, and I presume ape hangers from how he was describing the riding position, and he was making a crack about swapping my Aprilia for it.

If he WAS serious, it could be an interesting prospect, unless the Santee Saviors were terrible?

Anyone have any insights?

"Savior" frames were made by AMEN. Santee was a different company. Both were considered to be excellent frames.

I bought an Amen Savior (Save Your Asss) Honda 750/4 frame in the States in 1976 and built up a nice chopper with it. Had no problems at all with the frame. Welds were all good and the "plunger" type rear suspension gave a good ride.

Bacca has/had one which he was working on. I'd jump at it if the guy is fair dinkum. But check it out first to see if its an AMEN or a Santee. AMEN also made a rigid frame. Both are "period" and well respected.
Tex
(Growing old is mandatory. Growing up is optional)
Top

To add to what Tex says, the Santee Softtail was a swing arm setup with lowered seat rails... 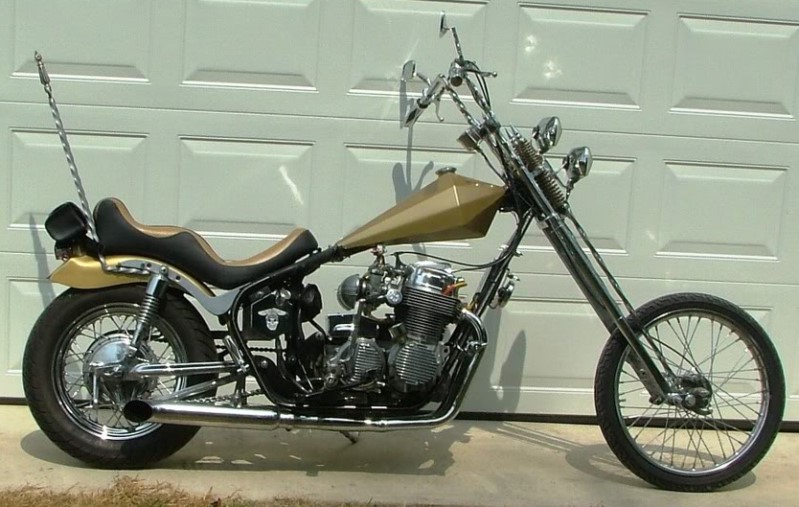 Check this out Neale.

Could be any one of these???

Prof wrote:To add to what Tex says, the Santee Softtail was a swing arm setup with lowered seat rails...

Thanks guys, I was only going on what Joe was saying, Santee softtail frame, Honda (K2?)"pursuit" motor from the '70's.

Actually, if it's a swingarm rather than plunger rear end, I think I'd prefer that, more likely to be able to get effective suspension that way. he never said savior or plunger rear end, I just assumed that as that was what I remembered the "softtail" chopper frames being in the day. But he WAS adamant that it was a Santee frame, so it may be worthwhile.

Think I may try to feel him out about whether he's serious about the swap or sale and try and get it, may be able to get SOMETHING on the road that way, and it could be a classic ;^)

OMNSHO
The plunger rear end was one of the best looking chop frames.
Not sure why I just really like the look of them and was thinking of fitting a plunger frame to my trumpy at one stage.

Those ones you posted would have been great Tex, also cheaper postage than a full frame.

I have heard that most plunger brands have a tendency to twist in a bump, rather than rise evenly. I've ridden behind one bike where this was the case, but haven't experienced others, just going on what I have read.

Would be interested to hear experiences of others who have ridden them.
Chopit'nrideit... Prof
Top

I've had two Santee Swingarm hobbies, they were often referred to as softails. I also now. Of one on the road for 30+ years. would I have another, too right I would.. Good thing about them is they will take just about any engine.....

The fact that Honda swingarm ( and for that matter GS, Z and Other) fit is gold.

Your problem as with everything in a non standard frame in Aus is Rego....Numbers/ VIN it's what matters,

And while. Love the pic above with the diamond tank, if it wore a set of lowering blocks or ran a GS 750 swingarm, it would look 10 times better.

Good luck....I'm totally Jealous
Does not work or play well with others
Loud pipes save lives
"These are not the Droids you're looking for"
Top

I'm trying to get some more information about the bike and whether he's open to passing it on, unfortunately the swap wasn't likely to be a serious offer (if it was I'd be on it immediately), but if it isn't a basket case, he's open to parting with it, and the agreed price is workable I'll be making a serious try for it. (If it's just something cluttering up the shed to him I may have a chance)

On the rego crap, that's a constant

( but I'm hoping the previous registration details MAY simplify the process a little (presuming no changes to the identified frame that it had when it was registered).

BTW: Some of you have mentioned that standard Honda/Suzuki/Kawasaki swingarms can be used, anyone know off the top of their heads what headstem/front end the Santee frames use ( given that they're apparently a spinoff of the Santee Harley products, don't s'pose they still use the Harley gear? That'd be handy.)

lol Neale, was waiting for a question about that,
was meant to be IMNSHO.

I am sure that makes much more sense.

Good luck with it,

Yeah, makes more sense that way, and it may make a tidier rear end, but I rather doubt that the suspension would work anywhere near as well, I thought there was a very good reason that plunger rears only had a short run on production bikes?

Hopefully my mate has asked the guy about the Santee (and found time to have another go at the Mikuni), wouldn't mind having a go at it (and I'd love to have a running bike for Mushter).

Never know what may happen in this best of possible worlds ;^)
Neale
'85 XV1000 with some mods, getting there
'86 XT600Z, going under the knife ASAP
Top

IMNHO = In My Not So Humble Opinion