Shortly after officially joining Choppers Australia, I was down at a local bike shop and found an old Yamaha SR250 hiding in one of the corners of the factory under a pile of dust.

I asked the boys what they were planning if anything in doing with the old girl. They said bring us a slab of beer and she's yours. Well, I don't think that I have ever raced out and brought a slab faster than that day. Once I got her home, I immediately started mocking her up with bits and pieces from various swap meets I had attended over the past years and got a final design. 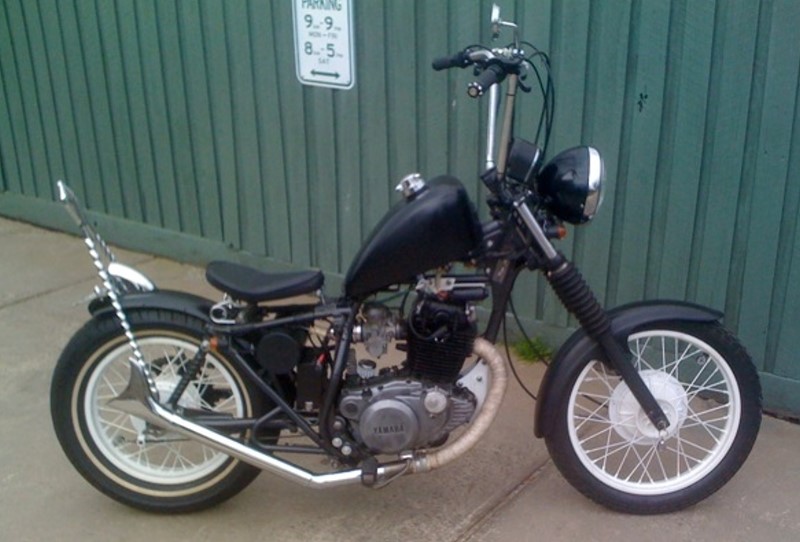 Basically, I stripped her down to a naked frame, cleaned, primed and painted her in rattle can "super dark grey", 86ed the rear shockers and found some 32mm steel reinforcing bar (the stuff they use to reinforce concrete buildings, I figure if it can hold up a building, it should be able to hold my big butt) and cut & drilled it to suit. Got rid of the old motor-cross tyres and got a couple of good second-hand tyres, basically hand-me-downs, cleaned the rims and hit them with a can of white paint. That got me to a roller that I started to see coming to life.

Next was the seat, playing around with positioning and after cutting the rear sub section off with aid from my MMM (Motorcycle Mechanic Mate) I finally mounted it securely to the frame with a couple of 2" springs.

I had an old King Sporty tank that I wanted to use for the holding of the juice and found a way to mount it up high on the back bone. For those of you that have built bikes before, you have most likely come across the problem I faced and will tell you about it a little later on. Originally I had planned to use a set of "Z Bars" using twin twisted steel uprights but they flexed way too much and reverted to a set of apes I had lying around. 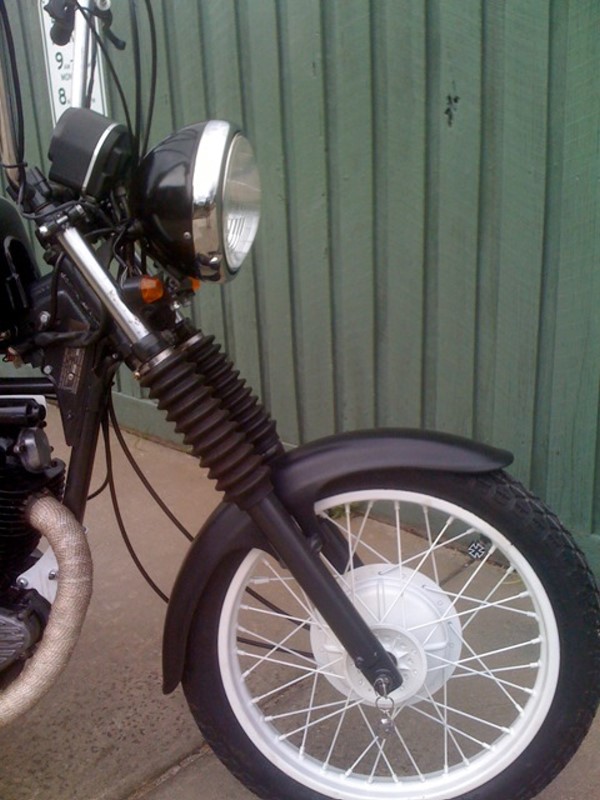 Now that the scoot was really starting to take shape, I was very eager to start cleaning the engine and truly see what I had got myself into. According to my MMM, he said that the bike used to run fine and that it may just need a new piston kit put through it and while the head was off, some head work and replace all the top end bearings. Fortunately for me my MMM's gave me everything I ordered at cost price, hence the $800 odd spent.

When all the engine parts where in, he called me and said that everything was in and if he wanted me to start rebuilding, to which I said don't touch it, I want to rebuild it with you looking over my shoulder. Well safe to say, we put it all back together and then I repainted it with again a can of engine heat proof "Black" paint. But this time I wanted to highlight some of the inspection covers so I buffed them back and sprayed them with a clear coat of heat proof paint. 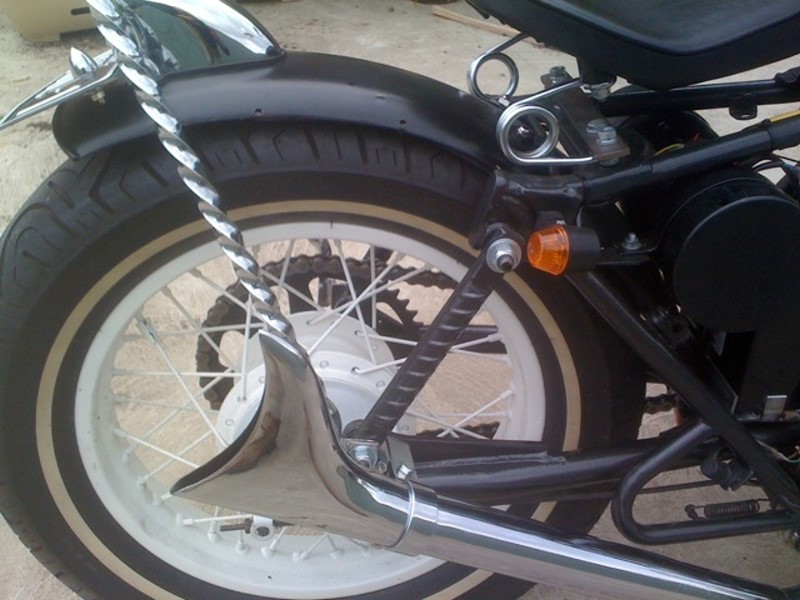 Following that, I tackled the wiring. Luckily I still had retained the original wiring loom and chased down the wiring schematic for an 1981 SR250. Being an electrician by trade helped me here, but I did refer to the articles that were published in CA CnB's. Once you have the basic idea, it's not that hard (on an older type bike). You see, the only switches I have on the bars are for indicators, everything else is under the seat. And starting with no key switch meant that I had to play with the wiring until I could nut out which wires I had to join in sequence to fire the bike up.

Once the wiring was sort of sorted out, I had put the engine back in the bike, and then connected up a battery. Started joining wires and ensuring all was working in the correct order, hearing the click of the relay was great when you applied the indicator and hitting the starter switch and the starter motor would turn, let me tell you, that got the adrenaline going. Right then my MMM said "Well, what are you waiting for, Get some fuel and throw it in her". 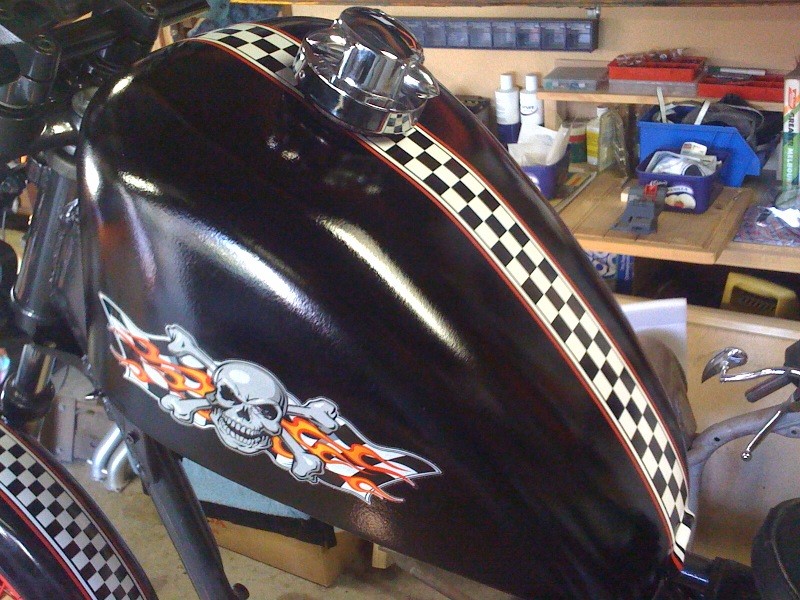 OK, starting sequence (Real nervous now, we've all seen the shows where they have started first kick); Turn power key, red LED comes on (Great, have power through the system). Ensure the bike is in NEUTRAL (Yep, the green-light is on within the panel), Run switch is in the on position (Argh, getting real anxious now), Fuel tap is on, choke is out and MMM says he has to go to the toilet. Anyway 5 minutes had elapsed and he is back, he says "Pull the starter switch and we'll see what happens". I pull the switch and nothing, Damn it!!!!! Anyway after around 5 minutes of looking over it, I had realised that someone had pulled the wires apart for the run switch. Put them back together and what can I say, while I wasn't looking, my MMM pulled them apart and walked away. He can be a bastard at the best of times. Pulled it again and this time it turned over, but did not fire. Damn, but not as much as the first. MMM played a little with the Mikuni and told me to hit it again.

This time with a pop and a fart, it fired into to life and was running; sounded very rough but running. We ran it for about 2 minutes to see it would quieten down, but not my lucky day. We buttoned it off and MMM said "I knew we should have replaced the cam chain when it was all apart". We placed an order right away and we had one within 6 days. When it arrived, I pulled the side covers off and replaced the cam chain and the spring for the tensioner. This time it started with the first push of the button and you could tell straight away as it sounded so much better. For a 250 single anyway.

The problem I had earlier on in the build was the high positioning of the tank, you see, I can have the tank almost 2/5th's full and even having it in reserve, the bike will still cut out. The fuel tap is too high up the tank. Future mod's are to eventually have 2 fuel taps welded into the absolute bottom of the tank coming straight out the back, and I also want to weld in an old skool fuel gauge on the outside utilising some clear hose. 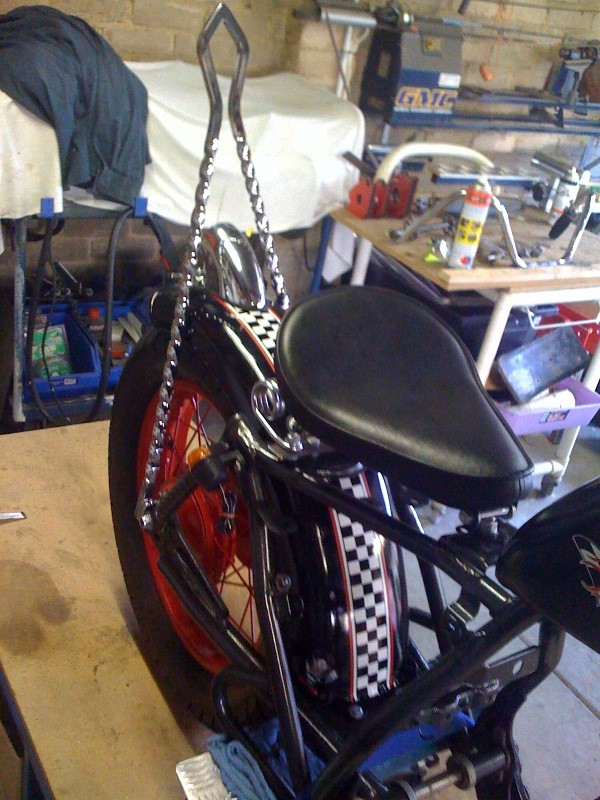 By now the bike is back at my house and on the hoist, got another mate (Hacksaw Joe) to give me a hand in rectifying a little problem with the gears. You see, click down for 1st, No problem; Click it up for 2nd and NO GO, straight into Neutral. We gave it a minor adjustment in the selector and that gave us a full range of gears. HS Joe said "Well what you waiting for?", Well, he didn't have to ask me twice. I threw a leg over and clicked it into gear and let the clutch out slowly. The bike lunged forward and I was moving on a bike that I had rebuilt myself. The feeling was overwhelming.

Anyway, with jeans and T-Shirt on, I revved it a little harder and ripped into the court, as I was going into 2nd gear, and had to turn the corner, I felt the bike, in various parts, beneath me , SHIFT! Then I remembered that I hadn't really tightened anything. Post haste I did a u-turn and headed for the garage. Coming towards the house now, a little crowd had started to develop, mainly friends and family who were over visiting, and I thought OK coming in a little too hot, time to grab a hand-full of front brake. Oops, that's not gonna be enough to slow me down. Better apply the rear brake.

Proceeded to step on the rear brake and it almost touched the ground. Didn't adjust the brakes at all did I.
Got it stopped and got it back up on the hoist and said to HS Joe, grab a handful of spanners and let’s give every nut and bolt a once over, and adjust the brakes before we do anything else. 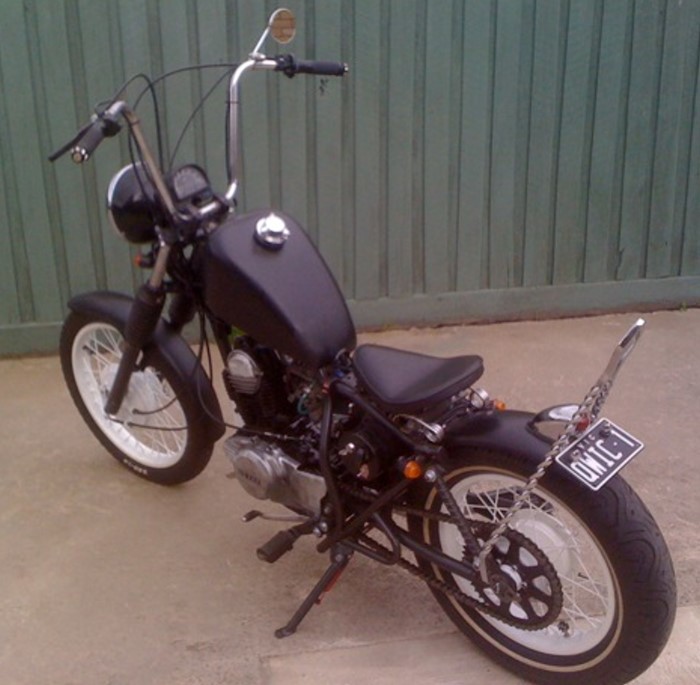 Finally, I have built a bike from what most would consider why bother. Lots of people, (I wont say friends) asked why a 250? My response? WHY NOT! The thing handles like a BMX and weighs about the same when compared to my XVS1100 classic, and for what? 800 odd dollars. Granted, its not the bike I would run on say a Mega Run, but to ride down to the bike shop, or to the pool hall on a Friday night... why the hell not?

For those building their own, I'm sure you've heard it before, but building your own bike gives you an over whelming sense of satisfaction. Especially when you do it all yourself. If I can pass on a little advice to some of the other prospective builders, 1. tighten everything before your first ride, believe me, the first chance you get to ride your very own creation, you wont even worry about what you’re wearing, let alone remembering if you had torqued up every bolt, and 2. Make sure you have some brakes before the first ride; Don't be test pilot and hope for the best.