I have to be honest here and admit that I had no idea what type of bike the LS650 was when I first came across it by accident about 6 years ago sitting in amongst the tall barney grass outside a million dollar Byron Bay beach house.

I paid $50 for it in complete and original, but weathered condition, as it had been sitting in the same spot for 10yr's. As we were still renting at the time, and money was tight from scraping up a deposit for a house, I basically started with pulling it apart. As you can imagine, the chrome and alloy where oxidised and the steel bits were all rusty. The motor turned over (which was a bonus), but would still need to be looked at . 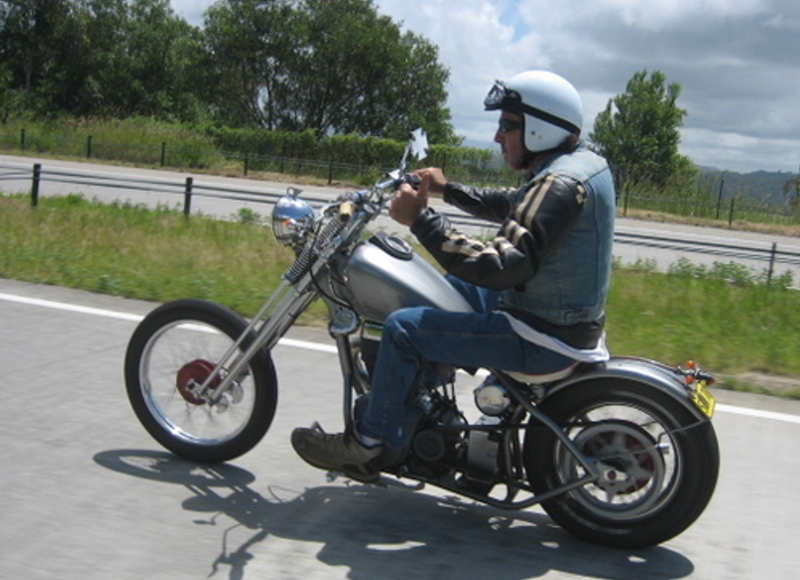 Not knowing what I had, I took the info off the compliance plate and googled it. Then the next thing to do was to get my hands on a workshop manual. The frame I thought would be the hardest area to do myself, as you only get one chance at getting it right. I didn’t trust myself to do it, so I shopped around for some quotes, got some fair prices, but we were saving up, so I put it on hold for a while and concentrated on the engine rebuild.

A few month's had passed when we were told the house had been sold and we had to vacate, so the pressure was on for us to buy our own house. Everything was put on hold and our possessions put in boxes. After a couple of months of settling into our own house I set about making a workshop out of the 3x3 garden shed and then started going mental buying tool's! My brother manages Repco in Byron Bay, so I got the tools at trade prices and then some , a big help and a huge saving. 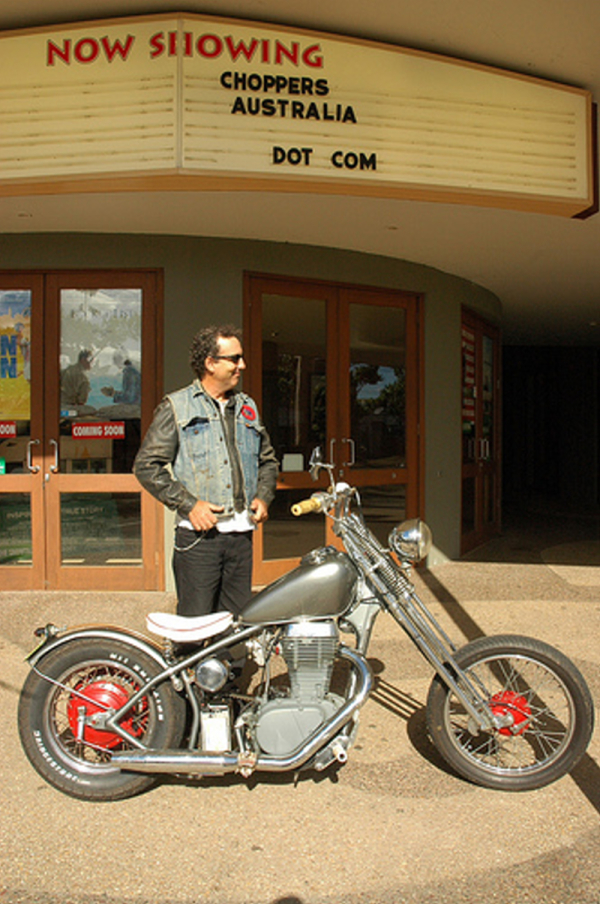 I also started to go on the scrounge again to swapmeets and garage sales.

It was around this time that I met up with “Shifter” from Anderson Custom Cycles. I told him what I was putting together and he said to bring it round and he'd have a look at it. Well it took him a few hour's and some beers and the frame was now a rigid!

He cut the frame from the back, where the fuel tank and the seat mount meet and followed it down to the bottom of the frame 2" before the swingarm pivots. Because the frame is still the same length as in its original form, he used a fraction of the materials and still used the original axle "dropouts". The rest of the frame is Mr Suzuki’s and all done on a contra deal. 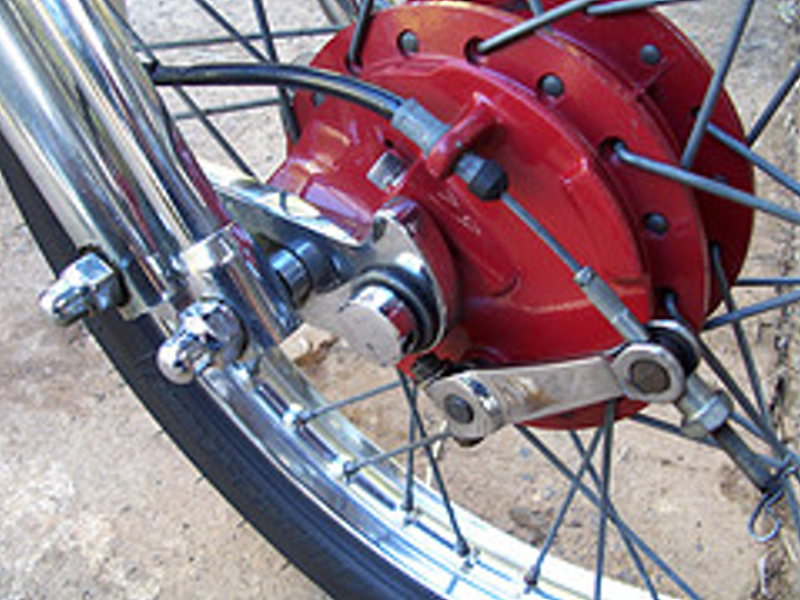 More weeks passed, as 'er indoor's wanted some work done on the house and not the bike. By this stage I had accumulated enough bit's & bobs to start putting together a chopper. 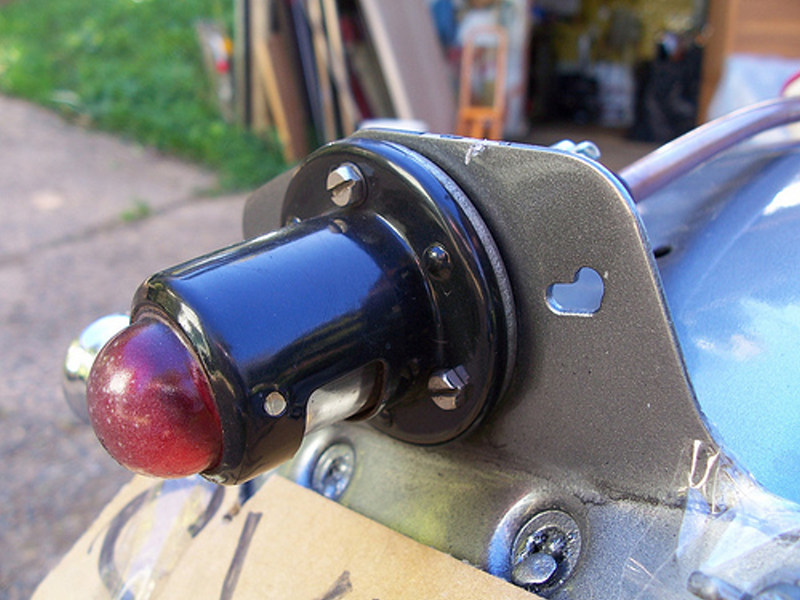 The first thing I did was put the motor into the frame and the rear wheel on, because nothing was going to fit to the way it was. I made a plate to fit the original battery box and welded nuts to the underside of the plate so the box is secured from the inside. To house the electrics, I used an old tin airbox from one of those early 60's japaneasy scooters. I then guttered it and very carefully spot-welded tabs inside to hold the fuses, CDI, rectifier, stator etc. 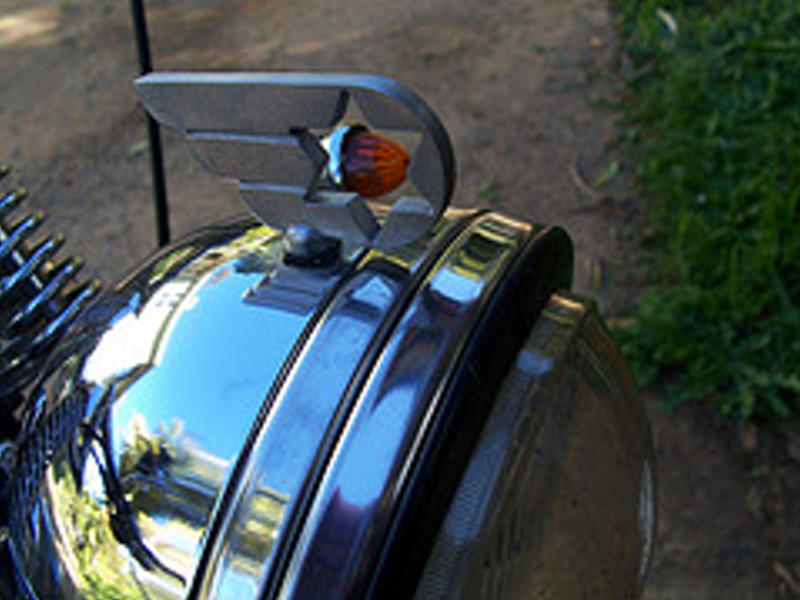 Rear guard and struts are all one piece and were part of 'er indoor's pot plant stand , that she picked up ages ago at a market. The tail light was off Ebay and is all metal & glass and is off an AJS. It only needed a lick of paint. Seat base also came off Ebay (cost $15) and was covered by a friend. The rear wheel & pulley is original Mr Suzuki with a powder coated hub and untouched spokes & rim... as is the front 19" wheel . 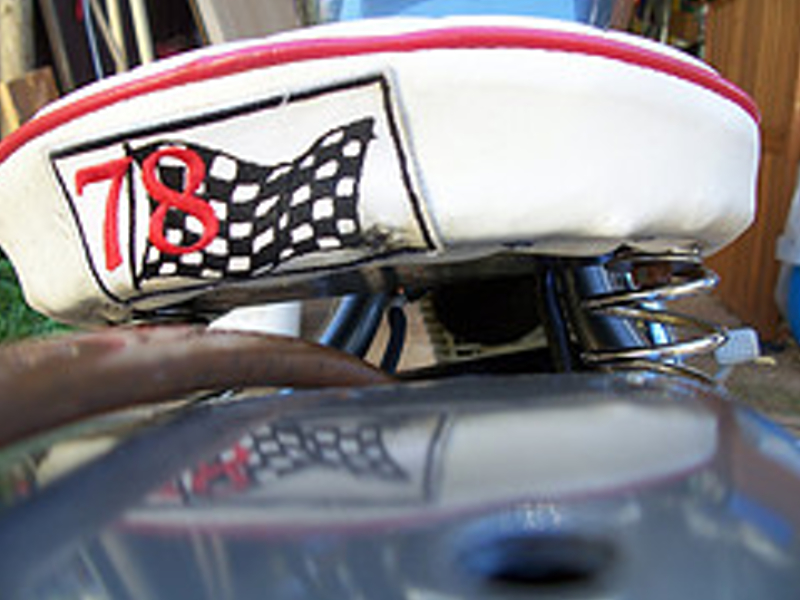 The springer forks where surprisingly easy to fit with very little stuffing around. The steering "bizo" was just right (what are the odd's) with only the bearings and races giving me a brain ache. After fitting them, the bike looked "stepped" so I cut off 4" from the legs, and drilled and re-bushed them. 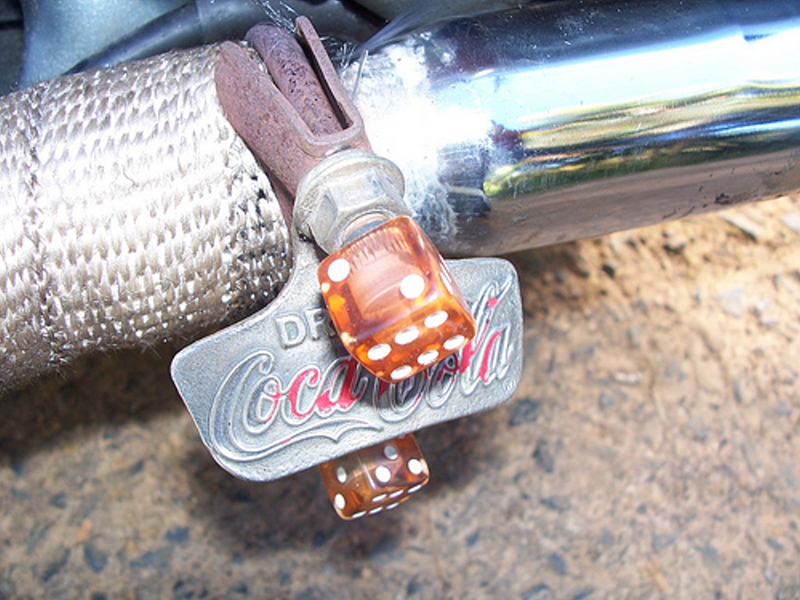 The headlight is a no name , but has a bubble lens cover which matches the tail light, and then mounted on top is a Malvern Star mascot. I hang onto very comfortable "Z" drag bars with vintage style white grip's on 6" risers. The foot pegs are 1" pipe sleeved with white handgrips. The brake & clutch levers have been drilled out to take white rubbers from a kitchen chair. 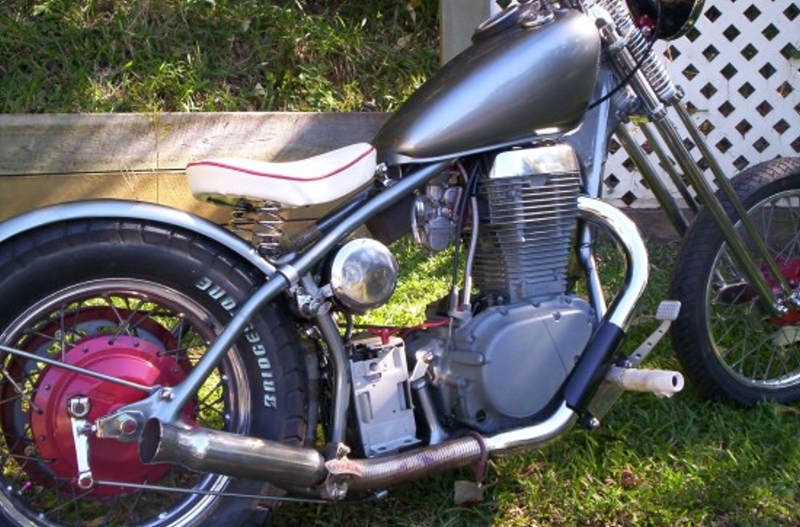 The motor has been painted with rattle can body primer and then clear coated. Other parts are mostly powder-coated and with very little spent on chrome. The bike's colour is Holden Opel GREY( not bloom'n silver!).
All up cost was $1678 including cost of donor bike and tools. 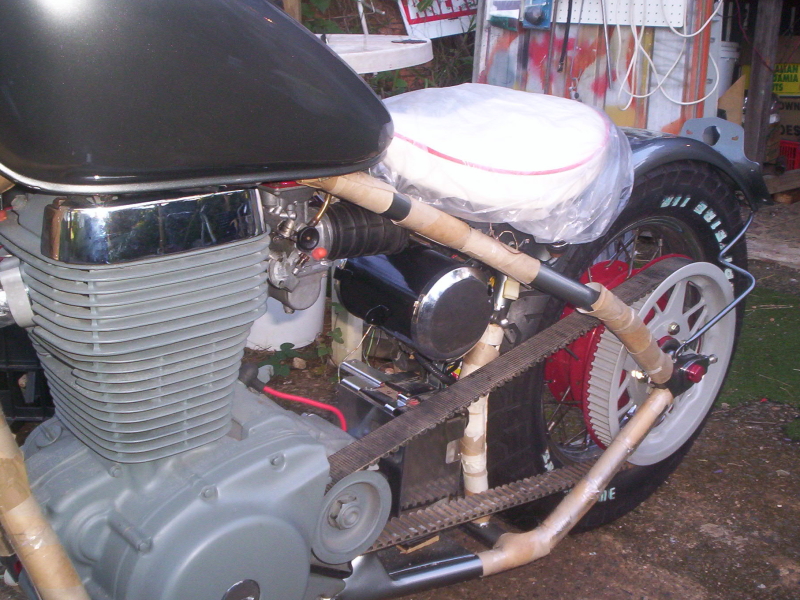 Even though it handles like a chopper , and I feel EVERY imperfection in the road ....... I just dig riding it

Prof's note... He digs riding it so much he rode it in company with other chopper enthusiasts from the north east coast of Australia to South Australia and return... a few thousand miles much of it in pouring rain! 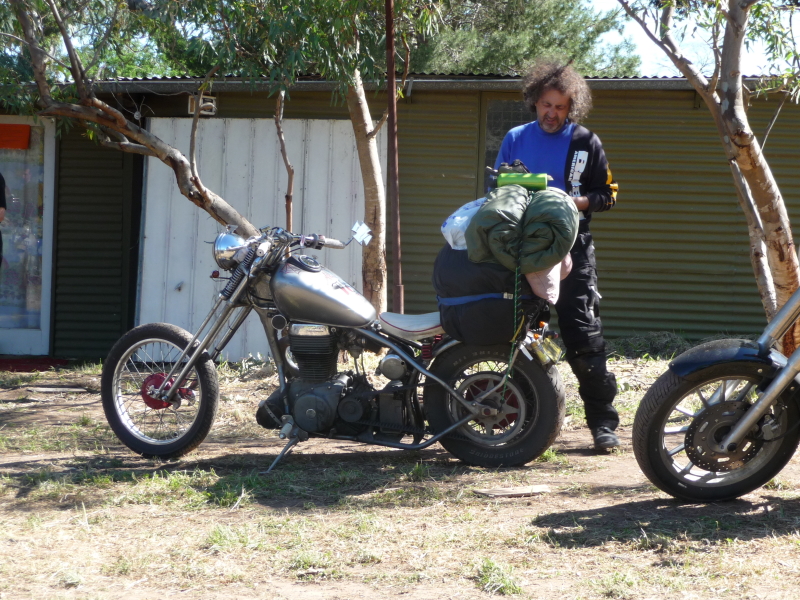