Hello all,
When Andrew asked me to provide some pictures and words regarding my Z1 chop, my initial thoughts were, why this bike, its nothing special, its just a budget re-build of an old 70s Chop, I haven’t done anything apart from resurrecting it... In fact I haven’t even painted it, its still a sad shade of pink!

Then I thought, well maybe the resurrection itself is the story he wants?
So here you have it! : 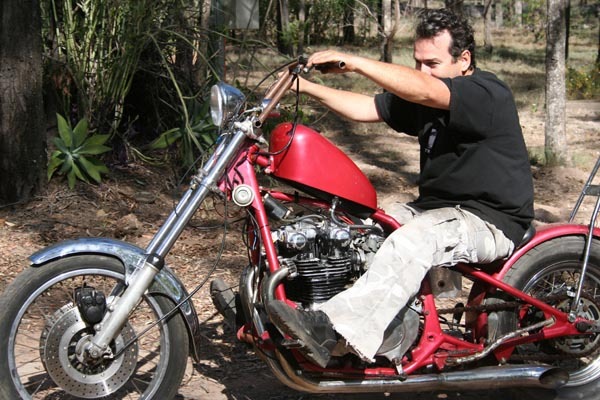 I had been using the usual channels; local trading book, asking mates and bike shops if they knew of anything, swap meets, the Choppers Australia forum and of course keeping an eye on Ebay.

After a couple of months I spotted the ad on ebay: 'z900 Chopper Project, one for you old Stone fans out there!' it read. It was one state removed from QLD. But after looking at the pictures and following a phone call with the owner, a bargain was struck.
Thing was, in order for him to ship the bike to QLD he first required payment.. and me depositing '$$$$s' into some unknown guys bank account this required a considerable leap of faith, making me pretty nervous.

As it turns out, thankfully, the guy selling the bike was a good Aussie and true to his word the bike arrived a few days later along with many of its parts in a big box.

This is exactly the state I expected (wanted even), sufficient work to get my hands dirty, but probably not extensive cost.. more about that later.

A few minutes inspection confirmed a blown head gasket, several missing engine casings, no brake lines, cracked tire side walls, all cables rusted solid, no airfilters, carbs sticking and corroded, HT leads broken from the molded coils, no battery or lights and lots of corrosion including the wiring. And this was only the chassis I was looking at.

In the large box I spotted a Sportster tank, rear guard, sissy bar, drive chain and even a battery box. I was well on my way 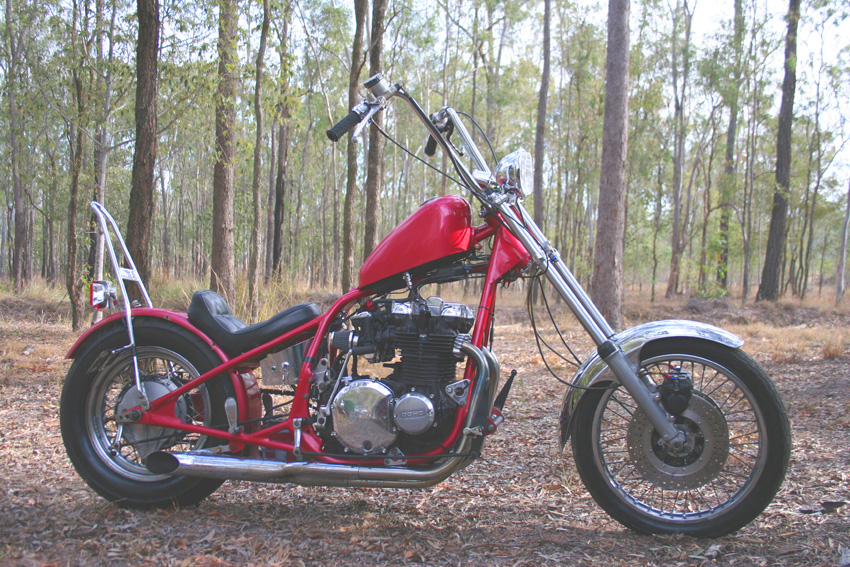 My first steps with any new project is to get the engine to fire up.

That way I know what to budget for engine rebuild wise, and when I get it to fire up those initial sounds seem to keep me motivated for the quiet months ahead until its done and you fire it up in a more complete and improved state.

I soaked the plugs overnight with copious amounts of WD40, around the head looked very corroded so I took no chances due to previous experiences of having plugs snap if you try rush taking them out.
Thankfully they came out without drama.

Then I squirted a little oil into each cylinder and left it again overnight.

The day of reckoning..
The temptation to jump up and down on the kickstarter and verify compression was finally too much. With the plugs still removed I slowly turned it over, what a relief, everything was free.

So, can of petrol in one hand, fire extinguisher in the other I went to work.. I bypassed all of the existing wiring and using a car battery, jump leads, coils from a CBX I managed to get it to spark.

Ok, now to add petrol..
I used a syringe to put a little petrol directly into the plug holes (I don’t recommend this at all, but always do it.) and then replaced the old, but now cleaned plugs.

In a cloud of petrol fumes I kicked the old Z and she sprung to life! As the throttle was non existent, I used my hand to lift the carb slides and she roared blowing a rusty baffle out of one of the pipes..

I found an old tank in the garage and put some petrol in, sufficient to let her run for a few mins. Thankfully although she sounded rough there were no knocks, rattles or thumps.

But quite obvious was the oil streaming out from many places, in particular the head gasket. 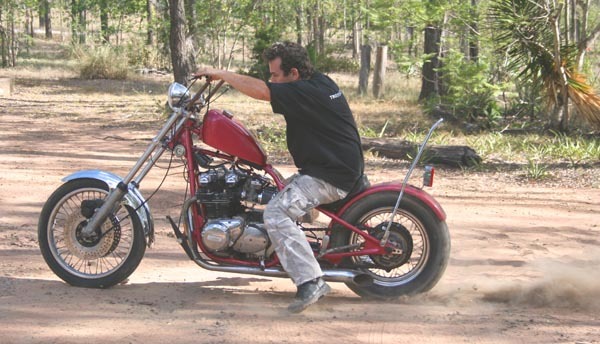 The next weeks were spent searching for items that were needed immediately, things such as a workshop manual and gasket set were top of my list. Unfortunately, in my haste, I could only get a gasket set through the local Kawasaki shop. ($185!).

I asked for a Z1 top end set and they ordered a z900 set.. most parts fitted ok, but not the main ingredient..the head gasket itself (see the CA site for details). When I returned to the shop they told me getting a Z1 head gasket would be difficult and after several days they phoned excitedly to tell me that they had finally located one in Sydney..for $250, just for the single gasket!

I declined their offer and searched ebay instead and couldn’t believe my luck, a guy in the US was selling 3! Luck got even better when I won the auction for all 3, the total being only $25USD!

Ebay USA proved excellent in sourcing missing casings, and the like. They seem to have an abundance of old Jap parts and are very cheap. Sadly the postage charges have recently risen and for some heavy items its best to wait until they come up locally. 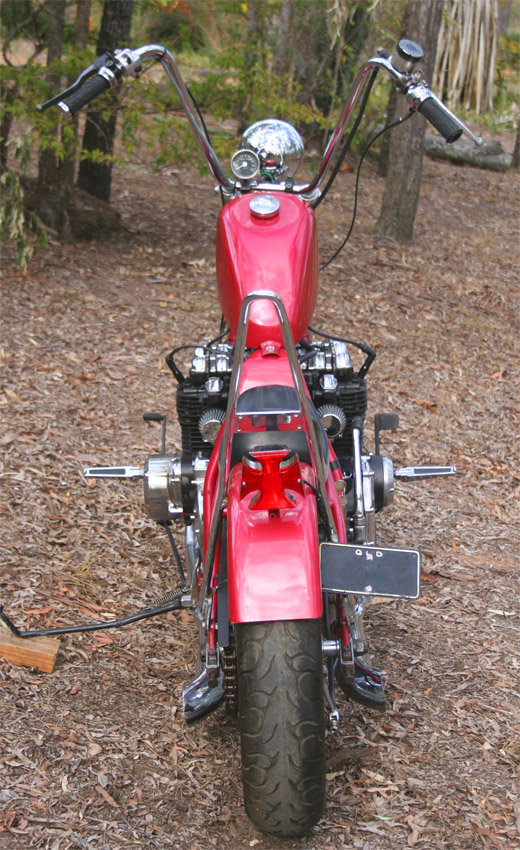 Anyway, the list does go on and on. But, if you are patient bargains are around (Im not that patient, obviously). I did find a local 'farm shop' that had a very dusty roll of 7mm HT lead (Solid Wire) and bought the lot for $5! Yes, there are bargains in the most surprising places... but ebay is certainly a good place to start.

Speaking of surprises, I was surprised to see a total spend (not inclusive of purchase price, but including transport) of approx $2k…and the bike is still Pink and tatty! I guess it all adds up, but I guess I could have achieved the same with less spending but with a little more time. 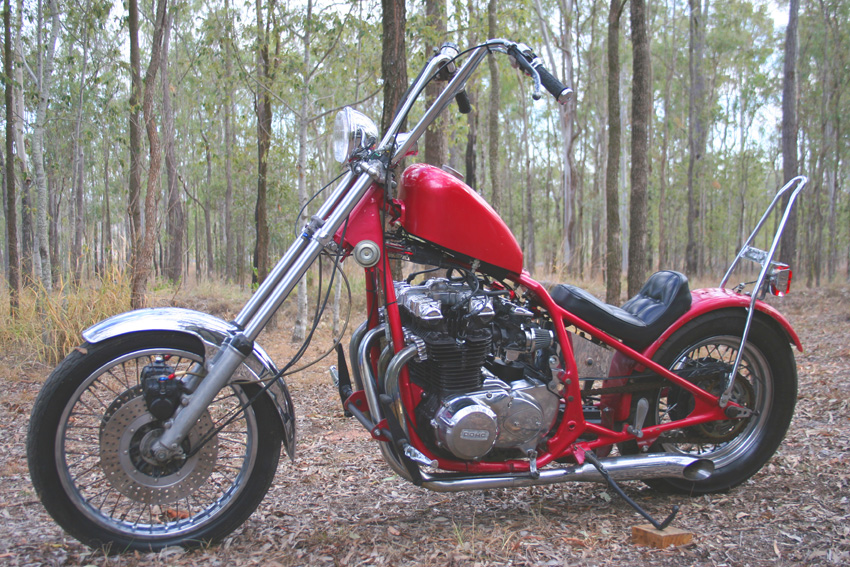 Would I do it again?

Well, I already am!

The new chop is little more than a concept at this stage, but watch this space..this next one is gonna be a beauty! and I don’t mean pink!!