Quick spin by CB into the city tonight...

Pics of yours or other interesting bikes taken out and about. Reports of Choppers Australia rides, with lots of photos and great stories. If you are not confident writing up a story, email Prof & get some help... choppers are all about riding, so let's hear your stories.
Post Reply
3 posts • Page 1 of 1

Quick spin by CB into the city tonight...

Picked up my diamond tanked CB from the Dyno guy today and didn't feel like it was running as well as it could. Have had this motor in another chopper frame and put plenty of miles on it with it running really well. My other CB also runs sweet, and this one was still loosing power at higher level of acceleration and boggy at the bottom end.

Decided on the spur of the moment to take it down to a mate in Hendon (Adelaide suburb) is is very familiar with CB's and does a lot of work on them.

Still light when I took off and got some photos on the road and some video clips.

I absolutely love my shovel, but a CB750 chopper with loud pipes is pretty good too. In really enjoy riding my Honda choppers and can't hardly wait to get my CB project done... springer front end, pull backs, TCS rear suspension... and low and long.

Bag of waterproofs mounted above tool roll purposely to break the wind. No wind up to about chin level. I chucked a mag and my phone in a plastic bag on top of this on the way home and it raised the protection up a few more inches... used to be called 'poor man's fairing' and works very well with still excellent vision... 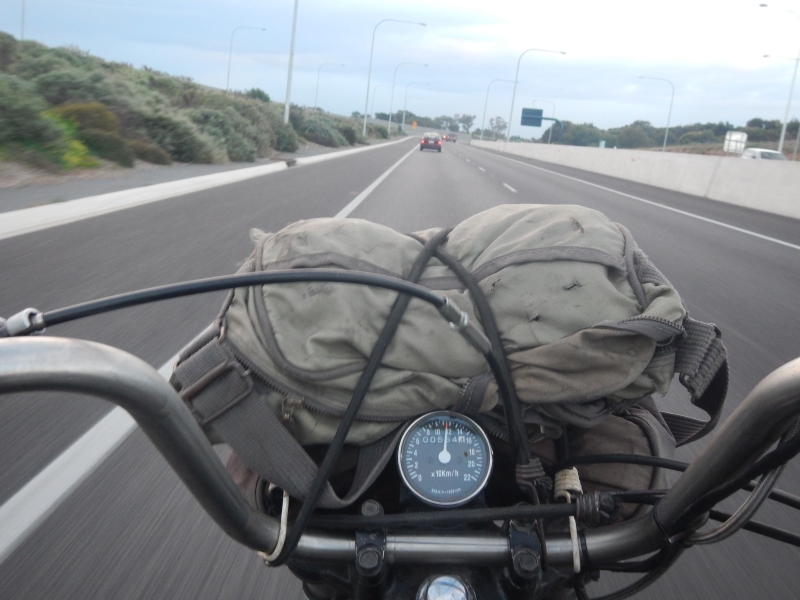 Barry suggested some 110 instead of 120 jets and suggested I check the air screws. He was busy cooking so couldn't do anything there and then. By this time bike was running poorly when taking off at the lights and quite annoying, but hey! We out on the road on a chopper so it's still pretty cool. Barry also said that mine being a K6 motor has a very mild cam and an earlier model cam would 'make it run harder' So something I've learnt. I wonder also if the carbs now on it are off one of my earlier model motors and not set up for the later motor. More on the tuning in a bit.

This chopper in the process. Interesting in that it is running double drive sprockets and double row chain... looks pretty neat. This headlight bracket is pretty neat also... arrow head shape. Light is KMart and came off a valiant. The Vic or NSW police used to run these KMart lights on their valiants so another bit of interesting trivia... 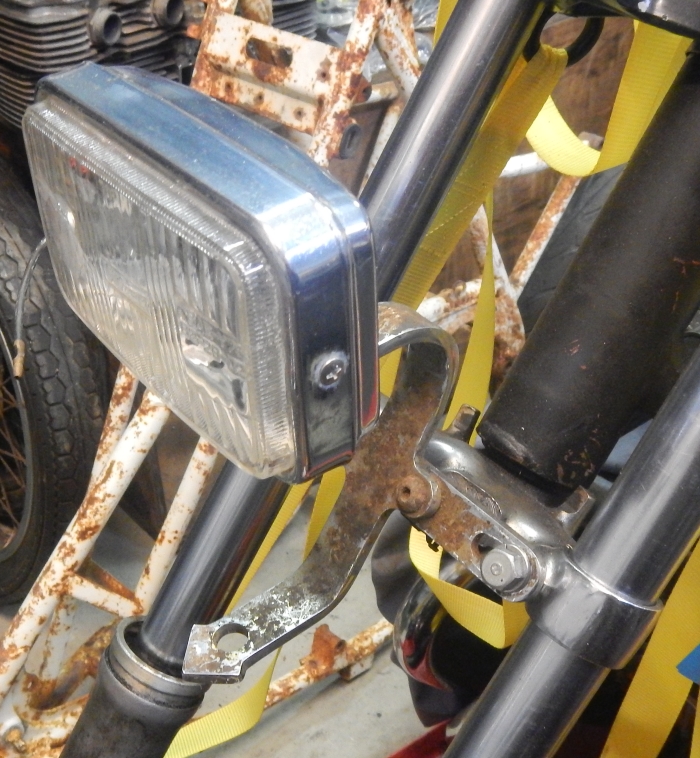 Took off from Barry's and with some unexpected time now up my sleeve, made some calls to local blokes with a view to dropping in, but none answering. Had a good chat with a new member in Mt Gambier. Filled up (diamond tank doesn't hold much and Barry reckoned the bike was running very rich) and reluctantly headed for home. The weather was very mild and perfect riding except for its low speed bogginess! 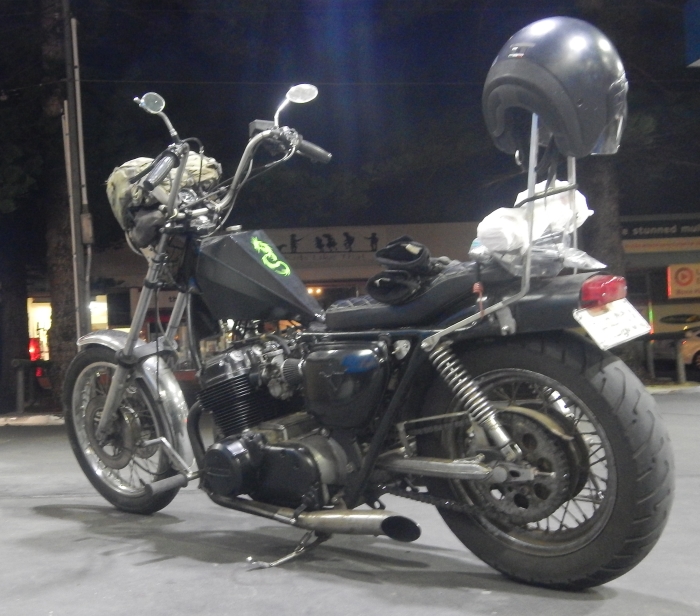 Blasted off home along the expressway, opening her up to clear out the plugs being particularly exhilarating.

Home sooner than expected. Rolled into the workshop and with the bike still idling, at Barry's suggestion checked the air screws. Factory setting is between 1 turn and 1½ turns. These were set at ¼ turn. Opened to 1¼ turns, and took off up the road and low and behold; low speed acceleration perfect... but hesitating badly at upper revs. Back into the workshop, back off to ½ turn. Back up the road... still good at low speeds and better at higher revs. That'll do for the night. Txt Barry with what I have done and ask advice. He says go back to at least 1 turn and put in the 110 jets. Tomorrow's job.

While all this detail? Well maybe it will help some of you out there. Will let you know what the 110 jets do remembering this is a K6 motor.

Re: Quick spin by CB into the city tonight...

Re: Quick spin by CB into the city tonight...