Pics of yours or other interesting bikes taken out and about. Reports of Choppers Australia rides, with lots of photos and great stories. If you are not confident writing up a story, email Prof & get some help... choppers are all about riding, so let's hear your stories.
Post Reply
3 posts • Page 1 of 1

Last week I visited bike shops in the Southern, Western and Eastern suburbs out to Main North East Road Suzuki. Started with Fearless and Show and Go down Brighton way then weaved up through Main South Road, into the CBD (Motorcycle Society) and then out along Main North Road and Main NE Road.

Saw a couple of interesting bikes and had good chats with a couple of shop owners/managers.

BMW's latest 'bobber' at Moto Adelaide... but why so bulky? 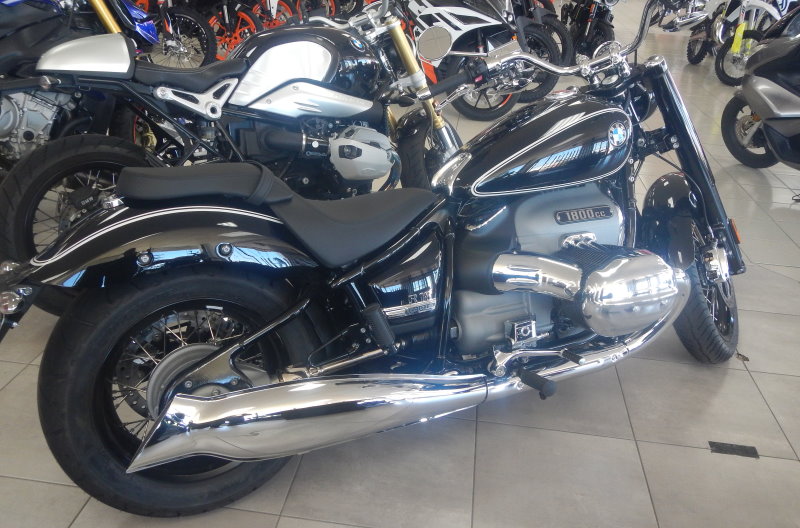 A current HD alongside my shovel at Harley Heaven... Quite small and chopper like... just needs a bit of rake and a longer front end and narrow wheel plus a king/queen and sissy bar. 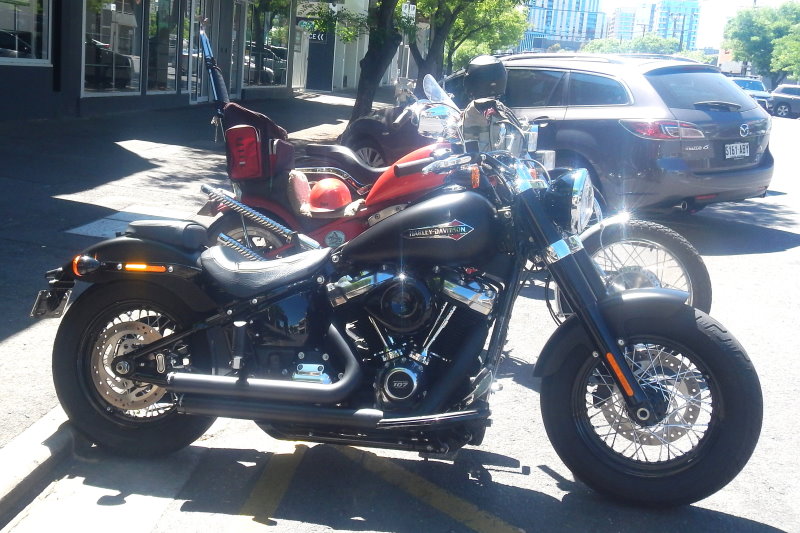 When I have to go into the city on jobs, I treat the day as if I am travelling the country and in some distant city... that is, I relax and take my time. I find it a great way to leave everyday life behind for a few hours... great therapy. For lunches etc, I pick up some food at the super market and find a spot where I can lean back with my chopper in full view...
... so here is my relaxing lunch in O'Connell St, North Adelaide... 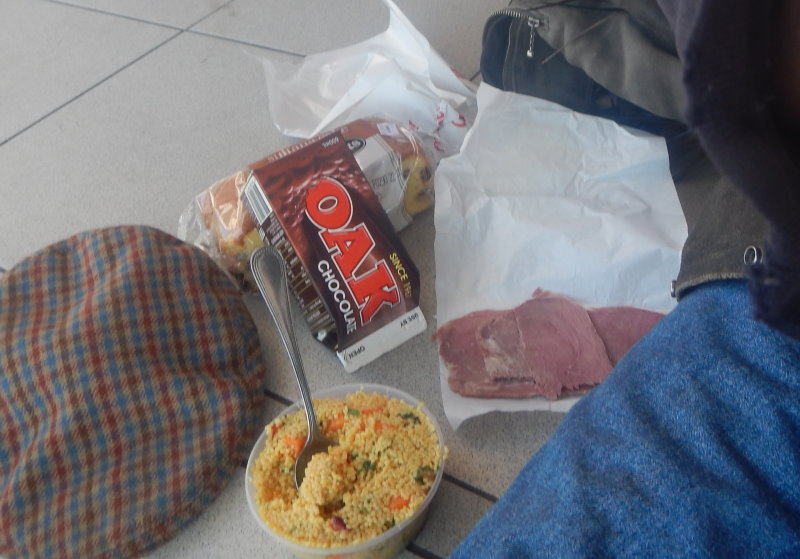 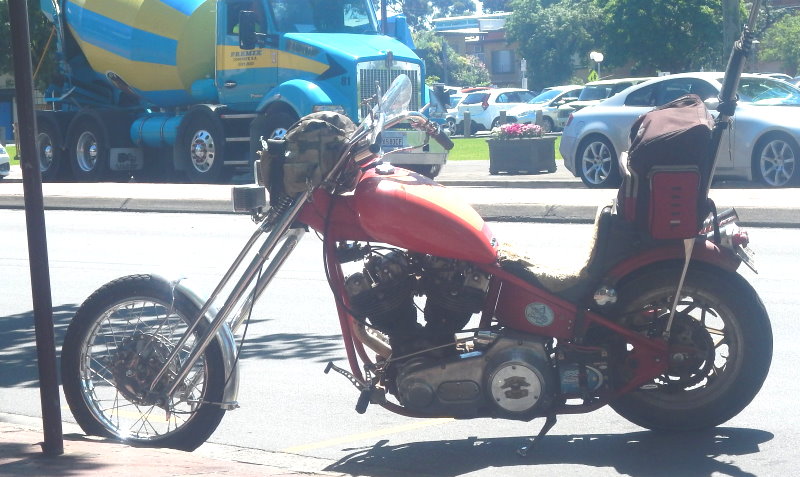 After Kessner I rode out to Ken's and spent some time with him. Saw a cool belt sander he has made for shaping knives... a man of many talents. He had dropped his tail light lens while changing a globe and I had offered to take him out a spare I had... on 50's glass car one that I had used in a custom tail light I'd built for him some years back. Helped him with that and with getting an indicator working. Indicator is a LED. The insides were all glued together and Ken cleverly unstuck it all and we soldered a broken internal wire. He then glued it all back together. I was quite impressed. Kicking myself I didn't get a few more photos.

So this day plus handing out leaflets elsewhere I put out almost 300 (inluding Macclesfield) and have had another 200 printed to do the rest of the shops.

Jason and had contacted me earlier about Garry's chromed tank nacelle. Chroming seems to change the shape of parts especially if they are thin... we assume they get too hot when being polished. Now he had some gaps. Would I bring down the edging I planned to use to see it the gaps would be covered. So Jason's place was my next port of call on my way home.

Edging did the trick ok, so that was one more thing off my list.

Jason had the BBQ going when I arrived and kindly shared his evening meal with me (and the dog!) 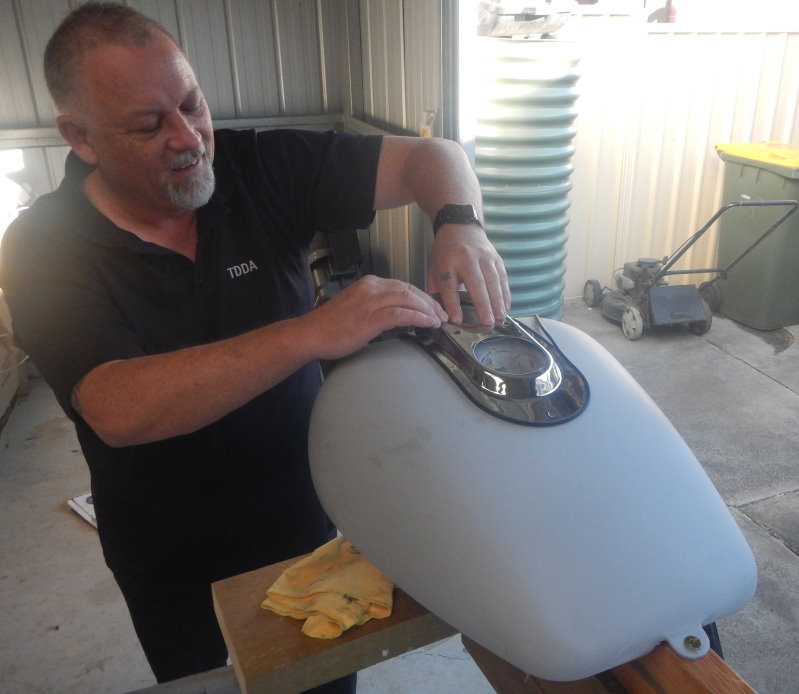 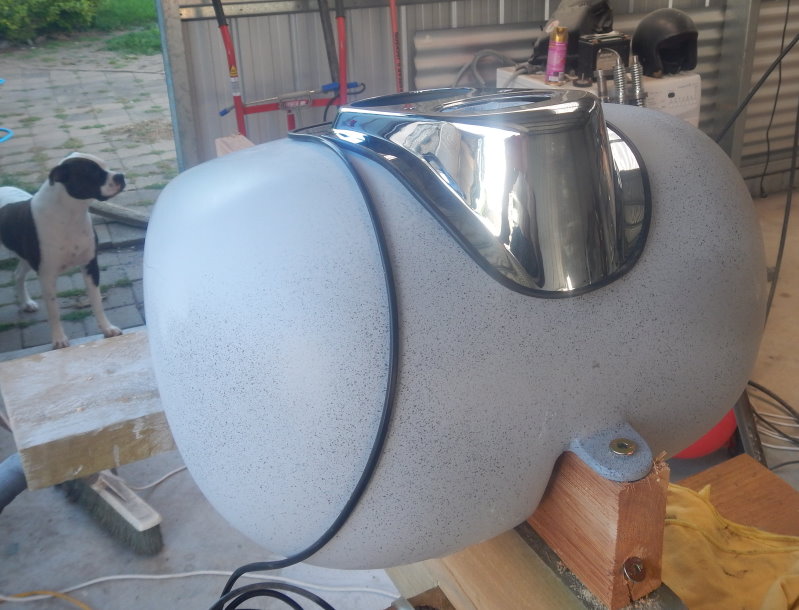 It was now just on dark and time to head home. Then a call... probably Rilda wondering how I was. But no, a call from a fellow who needs to get his rigid shovel through regio... He lived between Jason's and home to figured I had one more place to drop in on.

Checked out the chopper and worked out what needed to be done for regio. He saw the little cross on my jacket and asked the obvious question. Turns out he was also a Christian... and very interestingly, he had had a similar experience to me in dying and having a brief visit to heaven. He was dead 40 mins and I imagine the Dr (who said to be dead that long and come back to life was impossible!!) almost had a heart attack when he came to! Quite exciting stuff, especially as he was taken to see the gates of hell as well... sends shivers down my spine just typing it!!!!

So a long and eventful day and by the time I arrived home, it was "Hello dear" I'm off to bed"!

A few day later I did a quick run down to Victor Harbor and dropped off leaflets to the shop there. Had an interesting chat with the lady there. Seems we see eye to eye on all we discussed.

A new customer wants some 2" slugs for his Z1, so I borrowed a fork leg from Z1 bloke at Two Wheel Sales, Lonsdale and took it down to a CNC shop out of Victor and arranged for some sets of 2" 4" and 6" over slugs in stainless for the Z1/Z1000's. If anyone would like a set let me know. Expect them to be with in the $200 mark. I've run slugs for twenty years and if they are well made and join within the triple trees (at least an inch above the bottom tree) they are as good as full legs.

This time it was deliveries to shops north of Gepps Cross. However, I'd previously missed a new shop on south Road just near the tram line. Name eludes me. He's just rebuilt this genny shovel and the owner has it for sale... 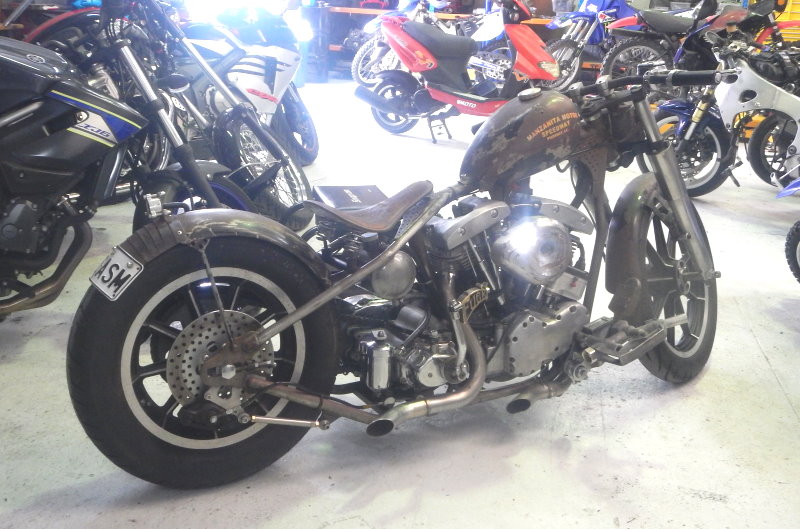 It was a beautiful day for riding and as usual the shovel just purred. Had lots of fun filtering at the traffic lights. So lucky to have the opportunity to ride such a nice machine.

Pulled into Hoey Racing thinking they wouldn't be interested in choppers. Wrong! A customer was just picking up some parts for his sporty (long forks so far) and told me he was chopping it more. We talked for at least half an hour and he was appreciative of meeting someone who had experience with choppers. While this was going on, one of the staff came out and then got the boss, to have a look at my front and rear suspension set ups. They were intrigued and actually impressed. This young staff member is building a chopper with a craftek frame and didn't have to be asked twice to take the shovel for a spin... came back impressed.

So that was a pleasant surprise and nice to have been able to help a couple of chopper enthusiasts... 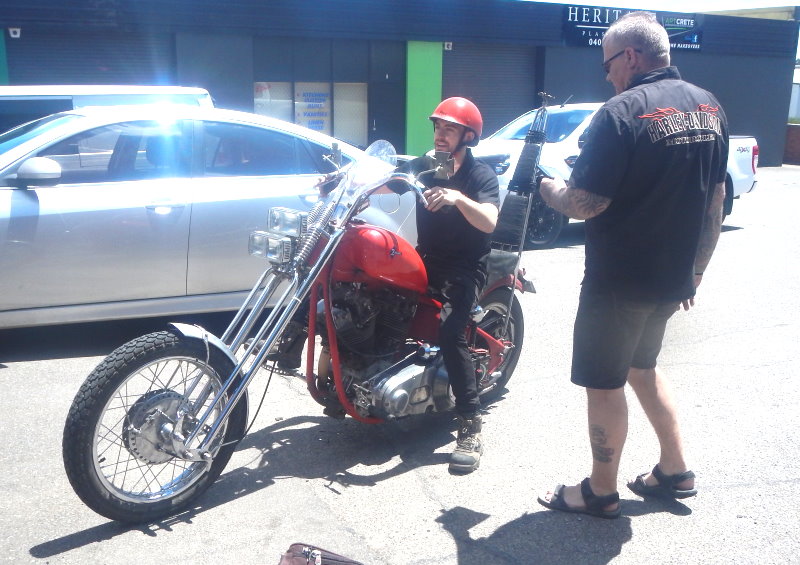 Did some more shops out north the final one being just out of Gawler. Actually quite surprising to me that every shop was keen to have the Muster leaflets.

I called Wayne and he was home, so he was the next call. We did a pile of work on his XS chopper some years back and it has evolved considerably since then... 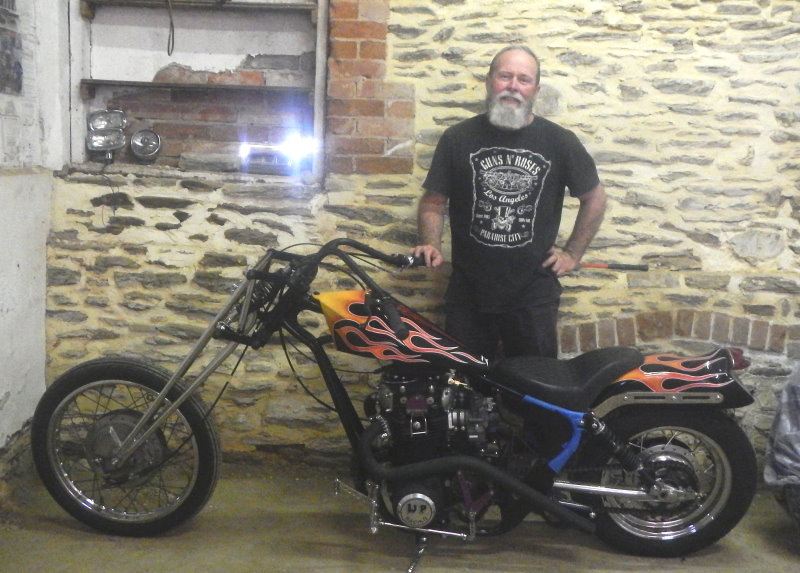 Terry dropped in and after a nice big piece of cake, it was time to head home.

Once again out on the road, my beautiful chopper rumbling along beneath me, every twist of the throttle providing a satisfying surge of power as I pass cars and sweep across the lanes... my springer is just a delight slight pressure on the seat enough to move the chopper in the direction I want to go.

But one can't get lost in the ecstasy of chopper riding on a beautiful day... one still has to be vigilant.

Coming up to one of the intersections a kilometre north of Elizabeth Centre, in the middle lane, I see an ambulance all lit up turning into the Turn Left With Care lane. I can see that the left lane in front of him is clear and ... Yoik's... the two vehicles in front of me are slamming on their skids. The ambulance driver is trying to cut across into our lane (a totally illegal move).

I find myself staring at the blank back of the van in front of me, the distance closing terrifyingly fast. There is no way I can stop in time. I know there is a car to my right, but with no time to look I swing across the lane aiming just to the right of the rear corner of the van anyway, hoping to miss it and not lose a leg in the process. As I shoot past I am aware of the tiniest of gaps between my left handlebar and the van corner. Half inch closer and it would have been curtains. I lean hard to the left within inches of the side of the van, his mirror passing over my shoulder. Man alive! That was close! In the meantime the ambulance has jammed on his brakes so as not to hit the two vehicles I have just dodged.

I get the hell out of there!

I keep an eye on the ambulance who has now moved across the lanes unbelievably stay there for another set of lights before turning off. I wonder if if he has any idea of the carnage he almost caused. Needless to say, my stomach is very unsettled for the next couple of miles!

I have to pick up some T shirts for new members from Ken's missus, so do that and then fully recomposed headed south. I chase up some lighter fluid from a smoke mart in North park shopping centre and wind around a few back streets and then back on Main North Road. Tummy rumbling and feeling rather tired. Time to stop and what better place than Villies at Richmond.

I figure I'd better get my phone out and let wifey know where I am. Ah. Message from Wayne with a link to a rigid HD frame and running gear. Have a good look at the pics. Definitely worth the money and something a customer is looking for. Message seller and give my number. He's out at Elizabeth, but I'll ride back out there if necessary. Someone else has first dibs, so I will have to wait. I offer him the asking price in case the other bloke wants to bargain and then sit back and enjoy a toasted sandwich, custard square and two hot chocolates.

Feeling a lot better, its back on the chopper and moving into peak hour traffic... and lots of filtering. Enjoy a real blast up the expressway and home in no time.

It's been a great day, some good contacts, some excitement and another job done. Wonder how many new chopper jocks we'll see at the Muster.

No news on the roller, so presumed sold. Pity. It was a worthwhile purchase.
Chopit'nrideit... Prof
Top